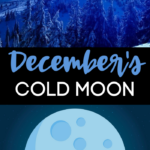 Bundle up for December’s Cold Moon since the temperatures begin to drop during the month of December.

December’s Cold Moon will rise before sunset while temperature’s will fall simultaneously in the same month.

Named the Cold Moon, this full moon gets its name from the corresponding frigid conditions around this time of year during the month of December, the holiday season, and Christmastime.

Known for its high trajectory across the sky, look up because the full Cold Moon will sit above the horizon for a longer period of time.

So when is the best time to catch the full Cold Moon?

The Cold Moon will rise mid December on the 18th at 11:37 p.m. ES according to The Old Farmer’s Almanac; you can find the exact time the full moon will rise near by using the moonrise calculator.