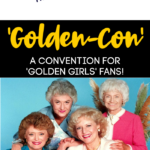 When I was a kid watching ‘The Golden Girls’ with my grandma, I never dreamed it would turn into what it did… total cult-like following, right?

Like the obsession grew over the past few years, it was never like this back in the day.

But moving on, now all of you super fans are able to gather together at ‘Golden-Con’!

There will be vendors, a costume parade, trivia games, parody shows, and I’m assuming a ton of cheesecake!

guest stars, producers, and others directly connected with the show.

Per the event organizers

Hmmm, who could they be? I mean from the OG girl gang Betty White is the only one left, right?

They haven’t confirmed nor has it been denied so we will just have to wait and see.

As of right now, ticket prices have not been posted, but you can stay up to date by following the information posted on thankyouforbeingafan.com.