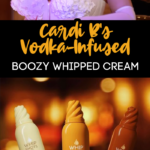 If your recycling bin doesn’t look like the inside of a freezer aisle at the grocery store, you’re not using enough whipped cream during the holiday season considering all apple pies and strudels should be slathered with the dairy dessert.

Rather than topping your brewed coffee from home or the apple pie from the fridge with Reddi Whip, consider boozy whipped cream instead!

That’s right, thanks to rapper Cardi B you now can spike your coffee without having to add Bailey’s Irish Cream.

Dubbed Whipshots, the boozy cream is available in three different flavors including Mocha, Caramel, and Vanilla.

Starco Brands has teamed up with Cardi B to launch all three flavors at retailers nationwide early next year for $5.99 and $19.99 bottles depending on the size you choose.

However, fans get snag a bottle throughout the month of December because 500 cans will release on Whipshots.com until December 31, so get there early!

That’ll add an extra kick to the slice of apple pie after the Christmas ham.