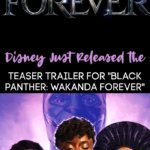 The trailer for Disney’s “Black Panther: Wakanda Forever” recently debuted and in just one day, the two minute trailer gained 172 million viewers, according to a source close to Marvel who confirmed to Variety.

After pulling in an astounding number of individuals watching the same trailer online, “Black Panther: Wakanda Forever” has become one of the top trailer debuts in the Marvel Cinematic Universe!

Not to mention, “Black Panther: Wakanda Forever” also gained the spotlight on social media with the hashtag #WakandaForever holding the number one trending spot for over five consecutive hours.

The teaser trailer is the first to unveil scenes from the “Black Panther” sequel and features the nation of Wakanda going to war against an army of Atlanteans, led by Namor.

And we can all count on Lupita Nyong’o, Letitia Wright, Danai Gurira, Florence Kasumba, Winston Duke, and Angela Bassett reprising their roles from the original “Black Panther” film who are also joined by several new faces.

Before watching the trailer at Comic Con, director Ryan Coogler and several others stood onstage to introduce the film and discuss the great legacy of the late Chadwick Boseman who starred in the original film.

“It’s going to be hard to follow that up, but we’ll try,” Ryan explained to the crowd.

You can watch the trailer down below (if you haven’t already) but to watch the entire movie, you’ll have to wait a few more months; “Black Panther: Wakanda Forever” releases in theaters on November 11.