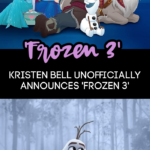 You can’t tell me that if Frozen 3 was to drop into theaters, you wouldn’t be there for it.

I can’t believe it has been 11 years since we first heard Let It Go. Don’t get me wrong, we’ve heard it about 675 million times since. But, the first time we heard it was in 2013!!

Then, we all ran Into The Unknown to catch Frozen 2.

Now, it just might be, we are going to be in theaters soon to watch Frozen 3.

Kristen Bell — who plays Anna in the Frozen franchise — was recently on The Tonight Show With Jimmy Fallon to promote her new book called “The World Needs More Purple Schools.”

She was chatting with Jimmy about the book, and he made the uncomfortable segway to Frozen.

Frozen 3 — can we announce anything?

The question we all want to know!

I would — like to officially announce — with ZERO authority — Frozen 3.

Kristen isn’t really announcing Frozen 3. She can say whatever she wants, because she doesn’t have any authority in the matter.

If Frozen 3 was really going to happen, Disney would probably use their HUGE platform, D23, to announce the film.

She does mention that Idina (Menzel, who plays Elsa in the movies) is onboard for a 3rd film.

So, to recap, there isn’t officially going to be a Frozen 3. But, the cast is all in.

Come on, Disney!! What are you waiting for?