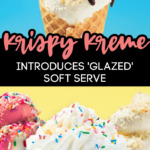 Krispy Kreme is turning up the heat in their sweets department, or rather cooling the place down for a more chilled treat for summer’s blazing hot days.

To feel cool during the dog days of summer, Krispy Kreme (and for the first time ever in the doughnut chain’s history), introduces soft serve ice cream that’s just as irresistible as their doughnuts.

Inspired by the o.g. glazed doughnut the chain is known for, their newest line of soft serve ice cream is inspired by the same glazed taste you get from every hot doughnut served in stores.

The ice cream, which was created with the secret Original Glazed Doughnut recipe, features the iconic glaze flavor and real whole milk, according to a recent press release.

Dubbed the Original Glazed Soft Serve, you can get your scoops towered on top of a cone, spun in a shake, or toppled over in a cup.

The new menu includes seven shakes with inspired flavor from some of the chain’s most popular doughnuts, and even waffle cones that are handmade from Krispy Kreme’s doughnut mix!

Plus, we should mention that the toppings and inclusions you can sprinkle on top are reportedly original creations to the chain, including several that are made with dehydrated glazed doughnuts; yes please!

Considering there are several shakes and soft serve flavors to choose from, it’s no surprise that you might be wondering how you can get your hands on a scoop or two, okay probably three.

Currently Krispy Kreme is serving the new ice cream menu in only ten cities across North Carolina, Tennessee and West Virginia, but there is good news so don’t cry over spilled ice cream just yet!

Krispy Kreme notes that they will be expanding to other store locations throughout the summer season, and you can cross your fingers in hopes of your location serving the ice cream by checking the list, here.

So it looks like Krispy Kreme has made their own spot in the ice cream space, so move over Dairy Queen and Baskin-Robbins, Krispy Kreme’s new ice cream combines doughnuts and soft serve.