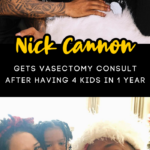 After 7 kids — soon to be 8 — Nick Cannon is about done with being a baby making factory.

I ain’t looking to populate the Earth completely.

After Nick had 4 kids in one year — yes, you read that right — his therapist recommended that he take some time off and become celibate for awhile.

While that’s definitely GREAT advice if you ask me, Nick has decided to take it even a step further.

I already went and got my vasectomy consultation.

Nick already pays an estimated $1.2 Million per year in child support. While he loves each one of his children, you have to admit, that’s a hefty chunk of change to be shelling out.

I don’t know if I would’ve designed it this way, but it’s one of those things when you’re blessed with the gifts of children—and as we all know, I’ve been through so much, I find solace, I find peace in my children and I find purpose

He acknowledges that there are difficulties working in the entertainment industry and trying to find time for all his children.

Afterall, he has 4 different baby mamas. He has to split his time among all of them, and still try to hold down his entertainment gigs.

I do have the guilt of not having enough time to spend with all of my children, as we all do because we’re working and constantly going — Especially right now when they’re younger.

Despite the hard times and the struggles, Cannon tries to be as involved in his kids’ lives as possible.

We was doing little league with my 5-year-old [Golden Cannon] this weekend. We got swim practice this week. I take my kids to school every morning. I FaceTime. Two weeks ago, [twins Moroccan and Monroe Cannon, 11] had their birthday party. We shut down Six Flags.

You definitely gonna see some Cannons on the screen and hear their music — I’m going to have to recoup some of this. So they gonna be some talented babies.

Nick has welcomed seven beautiful children into the world.

Tragically, in 2021 his youngest son, Zen, passed away at 5 months old from brain cancer. He was Nick’s 4th child born in the last year. His mama was Alyssa Scott.

Mariah Carey is the mother of his oldest — twins Monroe and Moroccan Scott. Carey and Nick were married from 2008 to 2016.

Golden “Sagon” and Powerful Queen belong to Nick and Brittany Bell. They are 1 year old and 5 years old respectively.