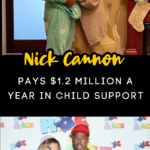 Thousands of people have to pay child support every year, but for Nick Cannon, he pays next-level child support.

You have to remember — Nick Cannon has seven kids with 4 different mothers.

In fact, he is currently expecting his 8th kid with his 5th baby mama Bre Tiesi.

When you add up all the child support for 7 kids, anyone is going to be pretty much working just to pay their child support.

But, Nick is a high-income earner — obviously — which means that he is going to pay out more money — HELLA more — than the average person.

Are you ready for this? Brace yourself.

I nearly choked when I heard that amount, how about you?

Now, that amount is just an estimate, but we get that number in a legit way. The $1.2 million was calculated by taking Nick’s yearly income, and estimating what it would take to keep his kids living in the same lifestyle that they would have if they lived with Nick.

[Nick’s] net worth does not get taken into account, but his yearly income does. If he is taking home somewhere between $3 and $5 million a year, you have to look at what would it take to have the children kept in the lifestyle of both parents.

It’s quite possible that Nick doesn’t have to pay Mariah Carey for the twins he shares with her. Why? Her income is most likely much higher than Nick’s. It is highly possible that she actually has to pay him support for the kids.

But, that’s not the story for the rest of Nick’s growing collection of offspring.

The first child with mother number one will typically get the most money, with priority then given to child number two and then three with another mother.

Then, if one of the moms has more than one kid with Nick, they don’t get double. They get more like one-and-a-half.

Is that fair? That’s not for me to judge. I don’t make the rules.

Nick tragically lost his 5-month-old son with Alyssa Scott, Zen, to a brain tumor in 2021.

To his remaining 4 kids (not including his 2 with Mariah Carey), Nick probably pays out close to $100,000 a month combined.

I can’t even imagine dishing out that amount every month. But, it’s obviously no problem for Nick. Afterall, he has a talk show, he is a rapper, he hosts The Masked Singer, he’s a comedian — he kind of does it all!!

Nick and Bre Tiesi are currently expecting a baby boy — which will be Nick’s 8th child. Congratulations to Mom and Dad!