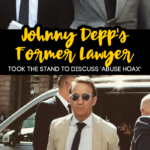 This hearing has been nuts y’all!

I’m usually a pretty good judge of what is real and what is not, and I’m just not buying what Amber Heard is putting out there.

I know the majority of people feel the same, although there are some truly diehard Amber Heard supporters out there.

Adam Waldman, Johnny Depp’s previous attorney from his failed 2019-2020 defamation case against Amber Heard testified Thursday and he had some things to add.

He had made a pre-recorded deposition for the court and he stated that he believes that Amber Heard set up Johnny using what he referred to as an “abuse hoax”.

Yes, to some extent I have seen evidence of things that show her statements to be false.

His statements to the media during the last defamation case are why Amber is countersuing Johnny for $100 million dollars in her own defamation claim.

As to that incident Thanksgiving 2013, I think those videos and photographs, yes, demolished her claim.

Adam Waldman stands firm on his statements about the “abuse hoax” and said that the videos and photos that he was provided by Marilyn Manson prove that Amber is lying.

Adam says that there are LAPD officers that were there and one was trained in domestic violence.

Amber had said the penthouse was destroyed, but the 2 LAPD officers testified that there had been no damage.

Adam also said that there are 9 other witnesses and that they had testified that Amber didn’t have any injuries to her face between the 21st and 27th.

He pointed out that somehow there were suddenly “bruises” that no one had seen.

Amber Heard and her friends in the media used fake sexual violence allegations as both the sword and the shield”; “sexual violence hoax ‘facts’. Quite simply this was an ambush a hoax.

Adam was referring to calls that were made to the police that he said were intended as part of the setup of the “abuse hoax”.

According to Adam Waldman that was not the end of it…

but the first attempt didn’t do the trick, so, Amber and her friends spilled a little wine and roughed the place up, got their story straight under the direction of a lawyer and a publicist, and then placed a second call to 911.

So, what do you believe?