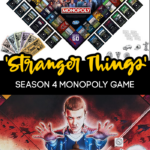 You can get a Monopoly Game that’s inspired by Stranger Things season 4, and it can just jump in my cart right now.

This game has been controversial, because it included key plot point spoilers for season 4. Even though the game wasn’t yet on store shelves, people were leaking the deets. *Gasp*

According to The Hollywood Reporter, the Duffer Brothers had a “total meltdown” when pics of the playing cards were leaked. These cards totally spoiled the plot of the show.

But, now that Stranger Things Season 4 is streaming on Netflix, there isn’t really a fear of spoiling the plot of the show.

If you play this game before you watch the show, that’s on you. Ha!

This Stranger Things Monopoly Game sounds hella cool! If you are a fan of the show, you are going to want it in your board game arsenal.

Side Note: We have a grandfather clock in our front room that I had to stop. The sound of the chimes was freaking me out. LOL!

Rolling the clock symbol on the die means Vecna has opened a Gate to the Upside Down! Players must spin the clock to find out where danger is lurking

My favorite part of any Monopoly Game are the gameplay tokens. And, these crazy fun tokens don’t dissapoint.

The tokens are iconic symbols from the show such as Hopper’s police truck, a Demogorgon, Hawkins High School crest, a slice of Surfer Boy pizza, and Dustin’s baseball cap

Now, this Stranger Things Season 4 Monopoly Game is currently on pre-order. It is slated to actually hit shelves later on this month.

Typically, I send you to the Amazon website for all your Monopoly preorders, but their page isn’t active yet.

Right now, you can preorder your Stranger Things Season 4 Monopoly Game from the Entertainment Earth website.

The preorder price is $28, and it is totally worth it, IMHO!