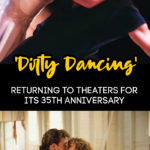 Nobody puts baby in the corner.

But, they will put her and the Dirty Dancing gang in theaters this August!

Yep. They are bringing Dirty Dancing to the big screen in August for the 35th anniversary of the film.

If you ask any female what their favorite movie is, I bet 90% of them say Dirty Dancing. It is just so iconic — such a great story!

It doesn’t hurt things that Patrick Swayze is in his prime, and dancing his way into our hearts.

You might just want to go and grab your tickets now, because you know this baby is going to sell out!

Loved by generations of fans, this cinematic treasure has inspired multiple films, a stage version, and reality dance competitions watched around the world. On the film’s 35th anniversary, celebrate the magic of Dirty Dancing and its timeless themes of love, family, class, and perseverance all over again.

For information on what theaters are showing Dirty Dancing, you can go to the Fathom Events website.

You just put in your zip code, and it will bring up all the screenings near you.