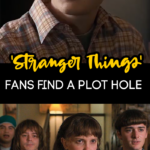 Three years. Can you believe we’ve had to wait three whole years to find out what the heck happened to Hopper?

Stranger Things season 3 ended in July of 2019, so I wouldn’t be a bit surprised if you have forgotten a thing or two about the show.

I even had to go back and rewatch season 3 of Stranger Things before season 4 dropped, because I knew I had forgotten little details that would be important.

Okay, here’s where I need to tell you that there will be spoilers ahead. If you aren’t caught up, do so before you finish reading this post.

Something happened in the 2nd episode of this season that you might have missed if you blinked too long.

There are, however, some keen observers that spotted a hole in the plotline of one of the characters.

These fans either have some wicked Stranger Things trivia knowledge, or perhaps they had just gotten through binge watching the first 3 seasons in advance of the season 4 premier.

Whatever the reason, these fans have pointed out that there is a hole in the plot surrounding Will Byers’ birthday.

This plot hole is so detrimental to the show that its creators had to quickly explain how the goof happened.

As season 4 commences, Will, Eleven, and Joyce have moved to California. They are trying to find their way and make a new life for themselves away from Hawkins, Indiana.

In the 2nd episode of the season Mike comes to visit his girlfriend, Eleven, and his best friend, Will.

Of course, they are all super excited to see each other, but things get kind of rough for Will.

Have you ever been the third wheel with your BFF and their new significant other? It is a miserable experience, and that’s exactly what Will is feeling during the 2nd episode of the show.

Mike ends up wanting to spend most of his time with Eleven, and Will doesn’t quite know how to deal with it.

During this episode, the 3 friends go to a roller skating rink. It is at this point that Will’s third-wheel feelings come to a head.

I just want to give Will a hug. He looks so miserable and sad.

The Plot Hole In The 2nd Episode

Here is where the plot hole comes into play.

If you remember WAY back in season 2, there is a scene where Joyce tells Will a story about his birthday. She mentions that Will’s birthday is on March 22.

Wait a minute, you might be thinking. It happens to be March 22 when the friends go to the skating rink in episode 2 of the current season.

Hmmm. This gives Will’s sadness at the skating rink a little more depth.

When you look at the storyline with this little tidbit in mind, you wonder why Will is really sad. Is it because he is the third wheel? Or is he sad because literally everyone has forgotten his birthday?

It’s kinda cool when you think about it.

What Did The Duffer Brothers Have To Say About This Little Plot Hole In Stranger Things?

The honest response is, clearly like the characters in the show, we also forgot about Will’s birthday. So the debate now is whether we adjust Will’s birthday or we just let it be really sad.

I mean, they did pick Will’s birth date out 6 years ago. It isn’t that surprising that goof ups will happen along the way.

Side Note: That is what Script Editors are for, though. They are supposed to examine the script, and make sure everything is consistent.

You know how George R.R. Martin has somebody — I mean, his story is more vast — and Stephen King has someone who just keeps track of this stuff? We need that. We don’t have that. So Ross and I, and my memory’s not great, but we love Will, and I don’t want people to think we don’t love Will because we forgot — we do!

I kinda wish they’d stick with Will’s birthday being March 22. It gives the whole story a different feel.

I’m not going to get my wish, however.

We’re thinking his new birthday — is going to be May 22nd, because “May” can fit in Winona’s mouth [in the Season 2 scene where Joyce says the date of Will’s birthday]. So that would be us George Lucas-ing the situation.