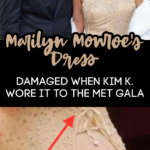 Well, this is exactly what we hoped wouldn’t happen — but knew it probably would.

It seems that the iconic dress worn by Marilyn Monroe — the one she wore while singing Happy Birthday to President Kennedy in 1962 — was damaged when Kim wore it to the Met Gala this year.

I’m not gonna say that the dress possibly got stretched out of shape when she tried to squeeze her infamous ass into that sexy, sleek fabric. But — um — maybe that’s what happened.

I mean, what the heck did they think was going to happen?

Any fabric that is 60 years old isn’t going to be the same after it’s stretched and pulled. Old fabric is like old paper — it gets pretty dang fragile, and you have to be hella careful with it.

Marilyn Monroe’s Dress Now Has Signs Of Wear And Tear

According to E! Online, there were pictures taken of the dress this week, and the famous fabric has signs of wear and tear that weren’t present pre Met Gala.

Side-by-side before and after photos of Marilyn Monroe’s dress show the dress now has puckering and pulled seams that weren’t there before.

The puckering and pulled seams just happen to be on the back of the dress — the butt. Coincidence? I think not.

The dress has been on display at Ripley’s Believe It Or Not since it was bought at auction in 2016.

You can now see it on display at the Hollywood branch of the Ripley’s Believe It Or Not museum, which is where it has been since Kim K squeezed her royal derriere into the jewel-encrusted fabric for the Met Gala.

Kim originally had trouble cramming her body into the fragile 60-year-old dress.

She was so determined to fit into the dress that she even went on a crazy crash diet during the month leading up to the Met Gala.

Kim K. had people hella concerned about her when she lost 16 pounds in one month. All just to fit her ass into the dress.

Seriously — how did she even have 16 pounds to lose?!?

Well now, the dress has the damage to show for its trip down the red carpet at the Met Gala.

BUT, now Ripley’s Believe It Or Not museum can display the dress as, not Marilyn Monroe’s famous dress, but the dress that Kim Kardashian controversially wore.