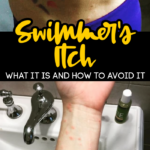 Many years ago my daughter’s popped up with a weird blistery-looking rash that itched like crazy.

It kind of looked like chicken pox and we went to urgent care to try and figure out what it was so we could treat it properly.

Even the urgent care doctors thought it was chicken pox until their test results came back and they informed me that my daughters had something called swimmer’s itch, also called cercarial dermatitis.

Out of all of my years of living life and being out in the water in many states and climates, I had never heard of swimmer’s itch until that moment.

My girls were MISERABLE!

Swimmer’s itch happens mostly in early summer and the rash looks kind of like chicken pox when they blister, or it can look like welts that turn into small red bumps.

The rash referred to as swimmer’s itch is caused by tiny parasites that are found in water where animals go poop, like ducks.

These parasites are microscopic and they can be found in oceans, lakes, and ponds.

The larvae of this parasite get under the skin and that causes the itchy rash, sounds gross right?

The good news is the larvae can not live long in a human body and will die off, however, if you get them repeatedly your rash will be more intense, which sucks.

The symptoms of swimmer’s itch are:

Most cases will clear up on their own in about a week, but if it lasts longer or you see pus, you will need to seek medical attention.

You can treat swimmer’s itch at home with a corticosteroid cream, bath soaks in baking soda or Epsom salts, colloidal oatmeal baths, and cool compresses.

Try to prevent scratching the rash because this could cause an infection, and even introduce something as serious as staph and other dangerous bacterias.

When my girls got swimmer’s itch they were playing in lake water that was near a campsite they were at for a birthday party.

Since this wasn’t actually the beach area it was more marshy and undisturbed by humans so the ducks would hang out in there.

You can help avoid swimmer’s itch by avoiding areas like that because the parasite is more likely to be found in warm shallow water that waterfowl feel more comfortable hanging out in and snails are found.

According to the CDC, applying a waterproof sunscreen can reduce the risk of contracting swimmer’s itch.