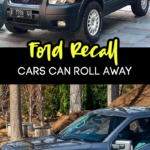 I’ve always had this weird phobia about parking my car on an incline. I’m terrified the emergency brake won’t work, and the car will wind up careening down a hill.

I’m picturing it either going off a cliff or ramming into another car — or worse yet — someone’s house.

Turns out, my phobia might not be too far off base.

According to CNN, Ford is recalling 2.9 million vehicles because they might roll away once put in park.

Ford is saying that the vehicles might not shift into the correct gear when you’re trying to put it in park. It could actually start rolling, and I’m so glad I own a Nissan right now.

The National Highway Safety Administration has put out an alert about certain Ford Vehicles.

Apparently, there is a problem with the bushing “that attaches the shifter cable to the transmission.” It may “degrade or detach,” and then you have unwanted and unexpecting rolling crashes.

Why Are Ford Vehicles Being Recalled?

The transmission on the affected Ford vehicles may not shift all the way into the park position, even though it may feel like it went into gear or the gear shift indicates that it has shifted into park.

People are getting out of their vehicles after putting them into park, but the cars start to roll away.

As you can imagine, this can be a dangerous situation. My grandfather had a rolling vehicle drag his elderly body across a gravel parking lot, causing him to have to have skin grafting surgery.

Obviously, the rolling vehicles have a significant chance of hitting other people or property.

Dealers will replace the under hood shift bushing and add a protective cap over the shift cable bushing, free of charge.