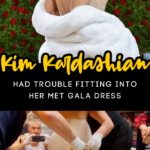 Did y’all see Kim K rocking that dress, that was actually owned by Marilyn Monroe, on the Met Gala Red Carpet?

You have to admit: she looks elegant and amazing!

But, there’s something you didn’t know about Kim wearing this special dress.

Her butt — yep, that INFAMOUS a** — literally would not fit into the 60-year-old gorgeous garment.

LOL!! Kim’s butt is taking over the news again!

Now, they were hella careful with this dress. Kim even had to wear white gloves to try the thing on.

Kim K and her team were under STRICT orders not to alter the dress in any way.

Afterall, it is a piece of American history.

This is THE dress that Marilyn Monroe wore when she famously sang “Happy Birthday” to President John F. Kennedy.

Not only has the dress never been altered, but it has allegedly never even been washed.

There will be no Downy Fabric Softener anywhere near this dress!

Some behind the scenes footage of Kim K trying on the dress has been released. In that footage, we see the lengths that Kim went through to make sure she got to wear the iconic dress to the Met Gala.

She had tried on the dress MONTHS before the gala, and she was determined to fit into the stunning slice of American history.

Kim put herself on a very restrictive diet to lose the inches she needed to fit in the dress. Supposedly, she lost 16 pounds in 21 days.

Is that even possible??

That 16 pounds put her just under the weight she needed to slink into that gorgeous dress.

There was only one problem.

Kim’s team of helpers — her entourage, if you will — all worked together, but they simply couldn’t zip the dress up over her famous bootie.

So what happened? They had to tie the thing closed.

Can we use that tie and tie it and keep it open? What if we did that and put a fur over?

You might have noticed that Kim K wore a gorgeous white coat on the Red Carpet. It seems this may have been more of a necessity than a stylistic choice. LOL!!

Oh my God! We can maybe fake it!

At the end of the day, they made it work. Kim was to-die-for on the Red Carpet, with her sleek blonde hair, that famous dress, and the fur coat.

But, we know the secret. *Winky Emoji*