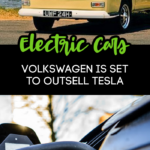 With the amount of money I’m spending per week to do normal things like go to work and go to the grocery store, I have nothing left for frivolities — like getting my hair done.

I have seriously been toying with the idea of moving to an electric car — even pricing them online and trying to figure out exactly how to make it work.

Since about 2006, the gold standard by which we measure all other electric vehicles is the Tesla.

In 2001, Tesla was the best selling electric car on the market, and pretty much everyone started wanting one.

According to CNN, Volkswagen has set its sights on outselling Tesla in the electric car market, and they just might get there by 2024.

Tesla has a pretty limited selection of vehicles. In fact, there are only 4 Tesla models to choose from.

This hasn’t really been a problem for them in the past.

BUT, the race is on to be the company at the top when it comes to selling electric cars.

Volkswagen has jumped into the race with both feet first.

The advantage they have is that they have 10 different brands of vehicles under their banner. Not only do they have the Volkswagen, but you can also find the Porsche, the Lambo, the Audi, and even more.

With all these brands making electric vehicles, it is only a brief moment in time before Volkswagen outsells Tesla.

Analysts expected that Volkswagen might outsell the Tesla as soon as 2023 — but there are several factors at play.

First, Tesla is busy trying to open more factories in Texas and Germany. This takes a bit of the focus away from trying to maintain its top position in the electric car race.

Also, Tesla is planning on introducing the Cybertruck — which will be one of the very first trucks offered in the field of the electric vehicle.

Now, this Cybertruck has been promised and promised again, but they keep pushing the release date further back.

So, we will have to see what happens in the world of the electric vehicle.

But, one thing’s for sure. We probably all need to be looking towards owning an electric vehicle. That gas isn’t getting any cheaper.