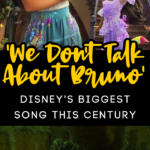 Encanto has done what I thought was not possible. A song from Encanto has knocked “Let It Go” — from Frozen — out of its icy cold spot amongst the Billboard top 100 chart, and just might keep climbing.

Please tell me you have seen Encanto. If you haven’t yet dipped your toes into the world of Mirabel, Bruno, their Casita, and the rest of the Madrigal family, I’ll wait while you go log into Disney+ and watch it.

It’s actually time to Talk About Bruno — because that song has officially gone higher on the Billboard Top 100 chart than any other Disney song has done in the last 26 years!

“Let It Go” — which quickly became every parents’ earworm nightmare — hit the record for the 4th highest charting song from an animated Disney movie back in 2014, peaking at #5 on the chart.

But, “We Don’t Talk About Bruno” — from Encanto — has smashed that record, and is currently in a 3-way tie for the 3rd highest charting song from an animated Disney Movie.

Also in 3rd position is Elton John’s “Can You Feel the Love Tonight,” from The Lion King, and Vanessa Williams’ “Colors of the Wind,” from “Pocahontas.” Both hit #4 on the Billboard Top 100 chart back in the 90s.

The only song to ever peak on the Billboard chart was Peabo Bryson and Regina Belle’s “A Whole New World,” from Aladdin — also from the 90s.

MAN! The 90s were where it was at for Disney films!!

That’s all about to change, because if Encanto continues to be the Powerhouse that it has become, “A Whole New World” better watch out! “We Don’t Talk About Bruno” is quickly creeping up on its record.

Lin-Manuel Miranda — creator of Hamilton and writer of the songs in Moana — is the genius behind the songs in Encanto, and that man has mad skillz. One listen to the soundtrack, and you will be hooked!

What Is Encanto about?

So, the basic storyline is that there is this family who has received a miracle (an Encanto).

Not only do they live in Casito — the magical house that seems to listen and obey — each child and grandchild in the family receives a different “gift” when they come of age.

One receives the power to affect the weather and one can cure anything with her baking. There is a grandchild that is a shapeshifter, one that can make beautiful roses appear out of thin air, one that has super strength, and one that can talk to animals.

Then there is Bruno. We don’t talk about Bruno.

(But if we DID, we would see that he has the power to see into the future.)

There is only one who has not received a special gift, and that is Mirabel.

Or, has she perhaps received the BEST gift?

Why Is Encanto so popular?

Who knows what actually makes a movie popular.

It could be because this film is from Disney — and we all love Disney.

Perhaps it’s because the music is so Epic. There isn’t a bad song in the lot. Seriously, go to Amazon Music and check out the soundtrack!

Maybe it’s because EVERYONE can relate to one of the characters in the family.

For me, I relate to Louisa — the strong older sister who feels she has to carry the weight of the family on her shoulders.

Which character are you?

Why don’t we Talk About Bruno?

Obviously one of the most popular main songs in the movie, we hear “We Don’t Talk About Bruno” when Mirabel has decided she needs to find her ostracized Uncle Bruno to help her save the family magic.

Because he can see into the future, Bruno has gotten a bad reputation for making disastrous things happen to just about everybody in Encanto.

His sister thinks he ruined her wedding day by making it rain. A lady in town thinks he killed her goldfish. One of the men in town thinks Bruno made him go bald. But, that’s just the tip of the iceberg as far as Bruno goes.

He has been locked in his tower (we don’t know how long), the entire village has shunned him, and nobody talks about — or even thinks about — Bruno.

The entire Encanto soundtrack is taking off like wildfire. It is currently #3 on the Billboard Top 100 chart, but I wouldn’t be surprised if it keeps right on going to the top!

You can hear “We Don’t Talk About Bruno” HERE.

Yes! Encanto has those famous Disney Easter Eggs woven throughout the story. Check them out HERE.