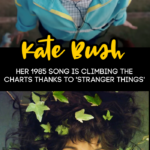 Stranger Things. Season 4 is turning out to be — not only the most awesome — but the scariest season yet, isn’t it?!?

Not only is it hella scary — I can’t sit in my parent’s front room, because they have a grandfather clock — but the Duffer Brothers have really stepped up their game in the music department.

This season has some of the best music that we’ve heard thus far in the history of the show.

Perhaps the BEST music we hear comes from the premier episode during Max’s storyline.

If you haven’t watched this season of Stranger Things yet, you may want to finish this post AFTER you watch.

In the season 4 premier episode of Stranger Things, we see a lot has changed in the world of Eleven, Mike, Will, Joyce, Hopper and company.

ONE of the things we see in the premier is the storyline for Max Mayfield. In the wake of season 3, Max is dealing with the death of her brother, Billy. (Remember, the spider thing — mind flayer — killed him when he wouldn’t allow it to kill the kids)

Max is taking the death of Billy pretty hard. She seems to have distanced herself from her friends, and has become somewhat of a loner.

With all this emotional hell weighing on her, we see her walking down the hall of her school — headphones on — listening to music. One amazeballs song.

LATER, the kids use the song as a talisman to bring Max out of the clutches of Vecna. They put her earphones on her ears, and blast the song. The song brings Max back to reality, and away from Vecna.

It is THIS music that has everyone talking.

What Was That Song Max Was Listening To In Her Headphones?

The song coming through Max’s headphone speakers is a tune called “Running Up That Hill,” and it’s completely amazing.

This song is now topping the charts, which is, in itself awesome. But, what’s even more amazing is the fact that this song is 37 years old.

Kate Bush debuted the song in 1985, on her fifth studio album, Hounds of Love.

According to NBC News, when the song was first released, “Running Up That Hill” peaked at # 3 on the UK Singles Chart and reached # 30 on the Billboard Hot 100 here in the states.

Now, 37 years later, Kate Bush is happy and surprised to see her song rise up the music charts again thanks to Stranger Things.

I have to admit I feel really moved by it all — Thank you so very much for making the song a No. 1 in such an unexpected way.

Not only is it shooting up the music charts, it has hit #1 in Europe and it is officially in the top 5 here in the U.S.

I salute the Duffer Brothers for their courage – taking this new series into a much more adult and darker place. I want to thank them so much for bringing the song into so many people’s lives — I’m overwhelmed by the scale of affection and support the song is receiving and it’s all happening really fast, as if it’s being driven along by a kind of elemental force.

If you haven’t yet listened to “Running Up That Hill,” you may do so HERE.