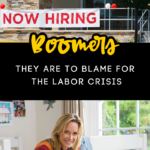 Millennials — they ruin everything.

I’m just joking — but everyone likes to blame them for everything bad that happens these days, AMIRITE?!?

Was it the Millennials or was it the Boomers?

When this labor crisis started, everyone was blaming the Millennials — saying that they got free money from the government (the stimulus checks), and were too lazy to go back to work.

I mean, why would they — they had suddenly become RICH.

I’m just joking again. While the money from the government helped ease financial burden during the pandemic, it went to pay for things like rent and food. Not many people had the luxury to hoard up their stimulus money.

This labor crisis is actually on the Boomers.

During the pandemic, many Boomers took an early retirement — sometimes it was forced, sometimes they opted to just retire early.

It just so happens that all of the Boomers who made a major exodus from the workforce during the pandemic had more effect on the labor crisis than those “lazy” Millennials.

All these Boomers left, and are not likely to return to the workforce — while the millennials who were laid off or fired during the pandemic are eager to get back to a job and a steady paycheck.

Last month, there were 3.6 million more Americans who had left the labor force and said they didn’t want a job compared with November 2019. A whopping 90% of them were over 55.

According to CNN Business, there are several reasons why Boomers aren’t returning to the workforce.

First, the stock market is doing exceptionally well. That, mixed with the housing market — which has EXPLODED — has led to more options for those high-income earners.

Second, Businesses are coming up with jobs, but they aren’t the high-paying jobs that millennials want. The Boomers who stayed in the workforce are taking up all the desirable jobs, and leaving the menial jobs for everyone else.

Ain’t nobody got time for that.

Also, Boomers are part of the elderly population. They are in the high-risk category for getting COVID. Being at work makes them more susceptible, so most of them are just throwing in the proverbial towel, and retiring.

So, there are a plethora of jobs to fill, and not enough people to fill them.

Many businesses have finally caught on, and are raising the minimum pay and increasing benefits in hopes of enticing people eager to find a good job.

It looks, though, like the labor crisis might be easing up just a little bit. People who were in the “retired” category during the pandemic are starting to come back to work.

Also, hiring efforts by companies appear to be working. They are getting more applications than ever.

Basically, the Boomers caused this mess, but it’s a great time to go out and take advantage of the suped up employment packages that businesses are beginning to shell out.