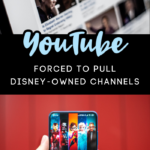 “We know this is frustrating news for our customers, and not what we wanted. We will continue conversations with Disney to advocate on your behalf in hopes of restoring their content on YouTube TV.”

YouTube had asked Disney to treat it “like any other TV provider, by offering us the same rates that services of a similar size pay, across Disney’s channels for as long as we carry them.” But Disney apparently didn’t think it was fair…

“We’ve been in ongoing negotiations with Google’s YouTube TV and, unfortunately, they have declined to reach a fair deal with us based on market terms and conditions. As a result, their subscribers have lost access to our unrivaled portfolio of networks.”

After a long, ongoing argument, it’s finally ended with no agreement, causing YouTube to have to pull over a dozen Disney-owned channels, including the Disney channels, Freeform, the FX networks and the National Geographic channels.

Because of this, YouTube is having to cut down their subscription price down $15, making it now $49.99.