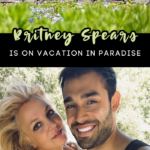 Well, this is the vacation that Britney Spears needed and deserves!

It was just a few days ago that Britney went “before a judge” (virtually) to give her account of what has happened with her conservatorship over the last THIRTEEN YEARS.

If you haven’t read the transcript, go do so! It is very eye-opening into the very controlled world that Britney has to endure on a daily basis!

So, after the whole court ordeal — which you KNOW was tough for her, because she has been kept quiet for so many years — she hopped on a private jet with her boyfriend, Sam Asghari, and went straight to Hawaii.

And by the looks of the pictures — because you KNOW the paparazzi are going to hound Britney’s every move — the couple is having a much needed, romantic getaway in paradise.

Just look at the smiles on their faces! It makes my heart happy to see people REALLY smile — not that fake smile that doesn’t even show in their eyes.

This Aloha paradise is just the outing they need — especially since Britney has felt so confined to her house during this whole conservatorship fiasco.

She even testified to the judge that she’s been threatened — not getting to take her Maui vacations — unless she goes back into the therapy, which she claims is abusive.

The cute couple is definitely enjoying their vacation on the tropical island of Maui, laying out and soaking up all those sun rays.

I must say, I’m a tad bit jealous, but then I don’t have to have my every move dictated by my father — so I’d say it’s a pretty good give and take — let her have her Maui vacay!

On the plane to their glorious destination, the couple was just like all of us, taking selfies and playing with the fun filters on their phones.

I love the fact that both Britney and Sam share so much of their private time with the world — that’s gotta be hard — but it’s fun to live vicariously through their pictures!

Now, there is no word on whether this was a trip “sanctioned” by her conservator — but it had to be, right?!?

I can’t wait until Brit’s legal team reacts to her bombshell testimony — I bet it’s gonna be good!

But, for now, I hope she gets to enjoy the fun and the sun that Maui has to offer, without having her every move scrutinized by her dad.

p.s. Here are a few more of their selfie shots, just because they’re cute!!