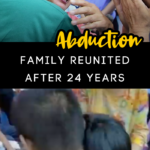 There was a tragic abduction of a 2-year-old boy in eastern China in 1997, and the family NEVER gave up their hopeful search for their son.

Their search even inspired the 2015 movie Lost and Love, which details a father’s search for his missing son.

He racked up nearly 500,000 kilometers (310,685 miles) searching for his son with simply the clothes on his back, a bag full of fliers, and a picture of the boy.

After not giving up for 24 long years, the search for Guo Xinzhen came to a very happy ending earlier this week.

Guo Gangtang and his wife, Zhang Wenge, hugged their 26-year-old son with tears in their eyes Sunday at a reunion organized by police in their hometown of Liaocheng in the eastern province of Shandong, according to a video recording released by police.

The story started back in 1997 when little Guo was abducted by a then-unknown female near his home in eastern China.

See, child abductions for sale are reported frequently in China, though exactly how often it happens is a bit unclear.

The problem is aggravated by restrictions that until 2015 allowed most urban couples only one child. Boys are sold to couples who want a son to look after them in old age. Girls go to parents who want a servant or a bride for an only son.

With this particular abduction DNA and other samples were taken, but back in 1997 the technology was very limited.

The police weren’t ever able to solve the case, but luckily the case was also never closed.

Guo Gangtang went from province to province looking desperately for his son, but was never able to locate him.

Although this was devastating for young Guo’s parents, Mr. Gangtang was able to help locate and reunite over 100 other families that were victims of child abduction.

Still, the parents of Guo never gave up.

Then came a new lead in the case!

Advancements in DNA technology have come a long way in 24 years, and thank goodness it has!

This year, authorities hit upon a new lead. Using the latest technology including DNA analysis and facial feature comparison, the Ministry of Public Security found a potential match in Henan — and when officers tracked the man down, DNA testing confirmed that it was the missing Guo Xinzhen.

A woman, identified only as Tang, had abducted the boy back in 1997.

She was also able to get her hands on two more boys at the time.

She met up with her then-boyfriend, and they all traveled to Henan, where little Guo was sold.

You would think that this would be the end of the story, but the couple confessed to the abductions after the police interrogated them earlier this year.

The kidnappers have not yet faced trial, but they face a number of penalties up to and including death.

We have no information on WHO abducted him, or on his upbringing with his “new” parents.

But, as for Mr. Gangtang and his wife, they can now move on with their lives which now includes their son.