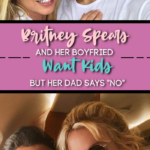 Britney Spears’ boyfriend, Sam Asghari, would love to have kids with her — but he is going to have to wait.

By now, you have most definitely heard the news of Britney Spears’ conservatorship drama.

If you don’t know the deets, let me catch you up quickly.

WAY back in 2008, Britney had a very public meltdown — yes, we ALL remember it — the one where she shaved her head and went after the paparazzi with an umbrella.

At that time, Jamie Spears, Britney’s dad, was able to somehow convince the courts that she wasn’t stable enough to take care of herself, and she needed a sort of caretaker.

She was placed under a “5150 hold’ in a psychiatric hospital for a mental health evaluation,” and her father was able to get a conservatorship on the music star.

That is all fine and dandy, but — some 13 years later — Jamie still has her under this conservatorship.

That means he gets to make ALL her decisions for her.

This doesn’t just apply to her financial decisions.

Jamie actually has say over every aspect of Britney’s life — including who she can marry.

He also gets to decide if and when she is allowed to have more children.

Yep, I said ALLOWED to have more children.

This is part of the reason for the Free Britney movement — which is aimed at abolishing the conservatorship against her, and letting her live an independent life.

So, basically at this point, even though Britney and Sam have been dating for awhile, they can’t take the relationship any further without Jamie’s blessing.

I don’t think that Jamie is going to grant his blessing anytime soon, as Sam has gone on record calling him “a dick.”

This doesn’t keep Sam from wanting the family life with Britney.

“Sam also sees marriage in his and Britney’s future,” the insider shares.

Sam wants to do so “when the time is right.”

“And they are able to wed without the restraints of her conservatorship and with the blessing of her family,” the source notes.

This conservatorship over Britney’s reproductive system reminds me of a little show called The Handmaid’s Tale.

It seems like this would be a basic human rights issue, and not just a simple conservatorship issue.

If not, you need to stop what you are doing, turn on Hulu, and give it a watch.

You will have nothing but sympathy for Britney.

I’m sure hoping that Britney and Sam get to have every one of their wishes fulfilled.

And, if that means kids, good for them!!

1.8K shares
This Woman Built A Custom Stairlift For Her Elderly Dogs So They Can Get Up And Down The Stairs
← Previous
You Can Get A Starbucks Galaxy Cup That Is Out of This World Gorgeous
Next →
Click here to cancel reply.