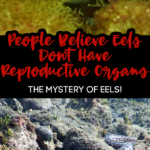 I tend to know a lot of weird and strange facts, especially when it comes to rare diseases and odd medical stuff.

This interest often leads me down other rabbit holes of strange information, and right now I am shocked that I had no idea that no one knows where Eels come from!

How did I not know that this was an unsolved mystery?

Did you know this… am I just behind the times?

So after watching this TikTok I had to do some research, and the guy really got my mind spinning!

In fact, today I learned that some people thought Eels spontaneously generated and even Aristotle thought they just emerged from the mud…

One super weird part of the Eel mystery involves the Bermuda Triangle, kinda… what exactly is happening there?

The Eels travel across the ocean to spawn in the Sargasso sea, right near Bermuda.

So older Eels go out to saltwater from the freshwater, they spawn and then new Eels travel back!

What people did not know in the past was that Eels go through many changes in their lifetimes.

In fact, at each stage of an Eels life, people thought they were all different creatures, when in reality they were still growing and changing… yet all were the same creature.

So when these younger Eels are studied, there are no reproductive organs found because they just hadn’t reached that stage of their development.

Once they do reach sexual maturity they head out to mate and spawn, but it’s all still a pretty big question as to how it all happens.

This is something that hasn’t been solved and I wonder if it will be answered in my lifetime… anyhow, there’s my nerdery for the day!