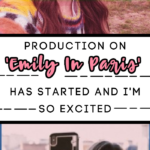 Emily is headed back to Paris, and that makes me so happy!

I was beginning to think it was never going to happen.

I mean, they DID tell us back in November that Emily in Paris was getting a second season, but then we went MONTHS without hearing a thing.

I already knew that Emily in Paris was one of most popular shows on Netflix in 2020, but Netflix has been known to just drop shows before.

Netflix — announced that Emily in Paris was its most-watched comedy of 2020, with 58 million households viewing the series. (It’s unclear how many of them watched the series in full.)

So, I THOUGHT it was going to actually be picked up for a second season, but it wasn’t until THIS WEEK that they started filming on the show’s sophomore season.

So, if you haven’t seen season 1, there may be spoilers ahead, so go watch the series before you finish this post.

Remember in season 1, Emily had moved to Paris — kind of by luck — and she fumbled her way though starting to work at her company’s Paris division.

It was very clear, from the very beginning of the show, that the Parisians wanted NOTHING to do with Emily.

She didn’t know how to navigate amongst her Paris peers, and was having a bit of culture shock trying to adapt to their ways and culture.

She had been so lonely in Paris by herself, but she eventually made some friends, and even a love connection.

By the end of the season, she was starting to get the hang of it, and really starting to love the Paris life.

So, what’s going to happen in season 2?

Well, we don’t really know yet.

Not even Lily Collins, who plays Emily, knows for sure how it’s going to go down in season 2.

Honestly I think Emily doesn’t even know [what will happen], and that’s the beauty of the way that they write the show.

Collins also had something to say about what she WANTS to see in season 2 — Emily’s backstory.

Now that we’ve seen her with all these ‘Parisisms’, maybe we get to actually get to a bit more of her backstory, and experience that with some of the other characters.

So, who knows what’s going to happen, but at least they have started filming!!

One thing is for sure, I don’t want to miss a single moment of it.