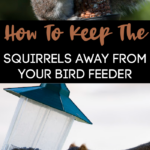 The 90s toy that could entertain for hours is now being used to keep the squirrels away from bird feeders!

The same toy that could walk down stairs from a series of metal springs are keeping the squirrels away from the bird food.

If you’ve ever experienced a squirrel demolishing the food you endlessly fill for the blue jays, cardinals, and robins, reach into that dusty box you have shoved in the attic and find the metal toy that wiggles and jiggles!

Thanks to Debby Keller who posted proof that slinkies can deter squirrels from the bird food placed out back, the video has recently received viral feedback with over 7 million views and 58 thousand likes!

Place your slinky in the middle of the pole that holds your bird feeder upright, making sure you secure and attach the top of the slinky at the top of the pole, release the metal toy and let gravity do the rest of the work.

The hanging slinky will act as a body guard the next time the backyard squirrel tries to take a nibble since the pole that was once used for climbing is now surrounded by a bouncing toy which will scare the squirrels away.

The birds will thank you later.