My parents have been married for forty-five years. I feel I should write this as an early disclaimer before I completely throw my dad under the bus and before I tell you how men shop for Christmas. See, my dad is one of those guys who doesn’t always…know…what his wife is into. It’s not that he doesn’t pay attention, or that he doesn’t love her (hello – 45 years!), but it’s like Christmas shopping is his achilles heel. My dad is an, “Oh, isn’t that nice” shopper. Over the years he’s gotten my mom such classics as: an ice scraper, kitchen towels, a Garfield t-shirt, spice from a restaurant, a pasta maker, wood, and many others… Thing is, he’s trying. Really trying. And that’s all that matters.

The other day I read a post over at Your Modern Family about the difference between how men and women go to bed and it got me to thinking about other differences between men and women. Namely: shopping for Christmas presents. 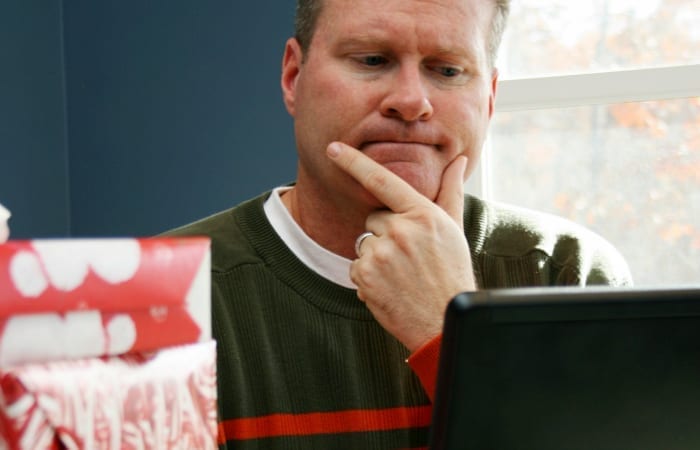 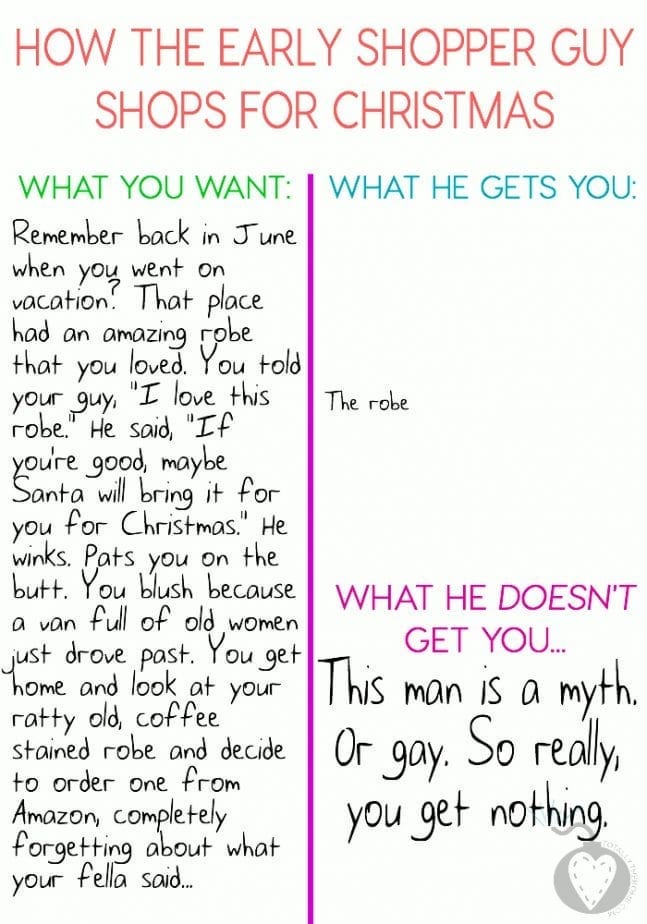 The Christmas Eve shopper – this one has it rough. He’s waited until the last minute because he doesn’t like crowds or shopping, but because he waited until the last minute, he’s literally got to deal with massive crowds while he does his shopping. This one is also risky. If you ever receive a bottle of motor oil for Christmas it’s because everything else was closed but he still wanted you to know he cared. 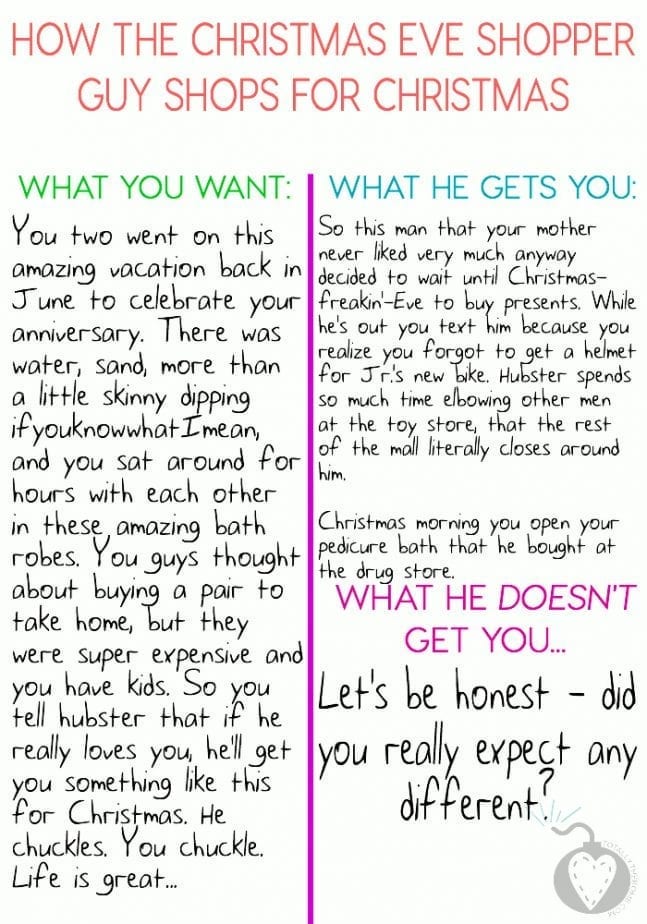 The “Oh, isn’t that nice” shopper – This one really Wants to get you what you want, but doesn’t actually Know what you want so he’s going to get it all. He’s a keeper, but you’re probably going to get a bunch of weird things under the tree…and very rarely what you actually wanted. 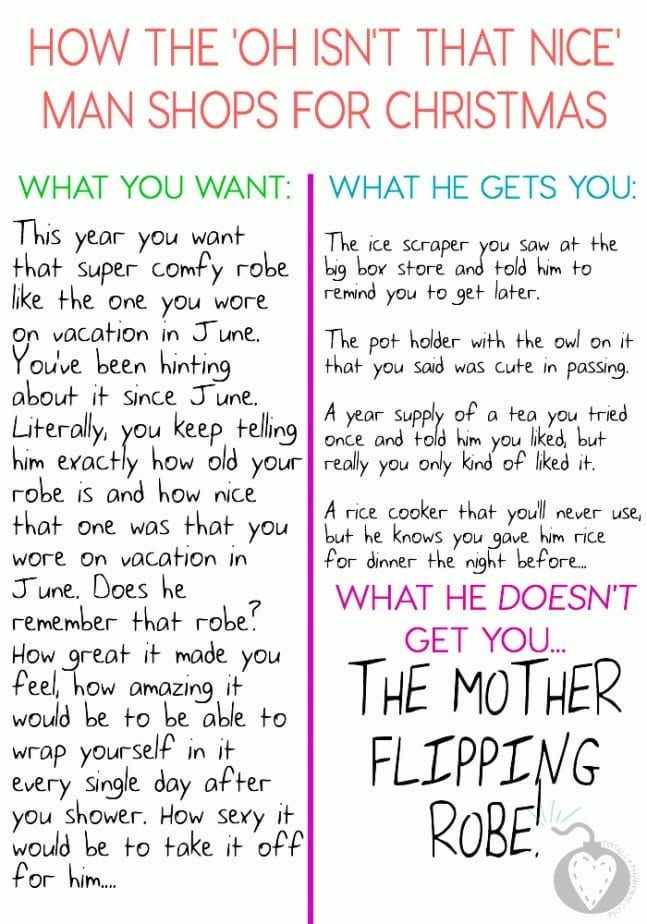 The unintentionally thoughtful boyfriend shopper – this is the guy you’ve been dating for only like a month or so, and he buys you the most gorgeous necklace you’ve seen in your life. You’re going to fall in love with this guy, but chances are he probably just didn’t mean to get you something so nice…try not to be too bummed if it doesn’t work out. At least you got the necklace. 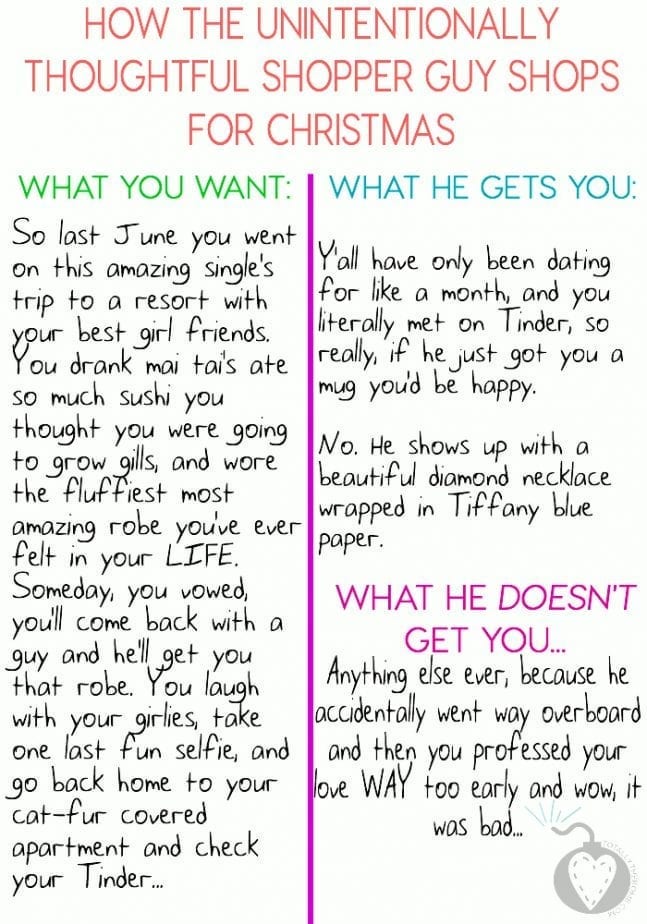 The completely thoughtless boyfriend shopper – this is the guy you’ve also only been dating for like a month or so, and he decides to skip Christmas because the relationship is so new. *double blinks* Skip. Christmas. DEFINITELY not a keeper. Not because he didn’t get you something nice, but because c’mon…how hard is it to at least be “Oh, isn’t that nice” guy for Christmas. He could have gotten you a mug. A mother-flippin’ mug. 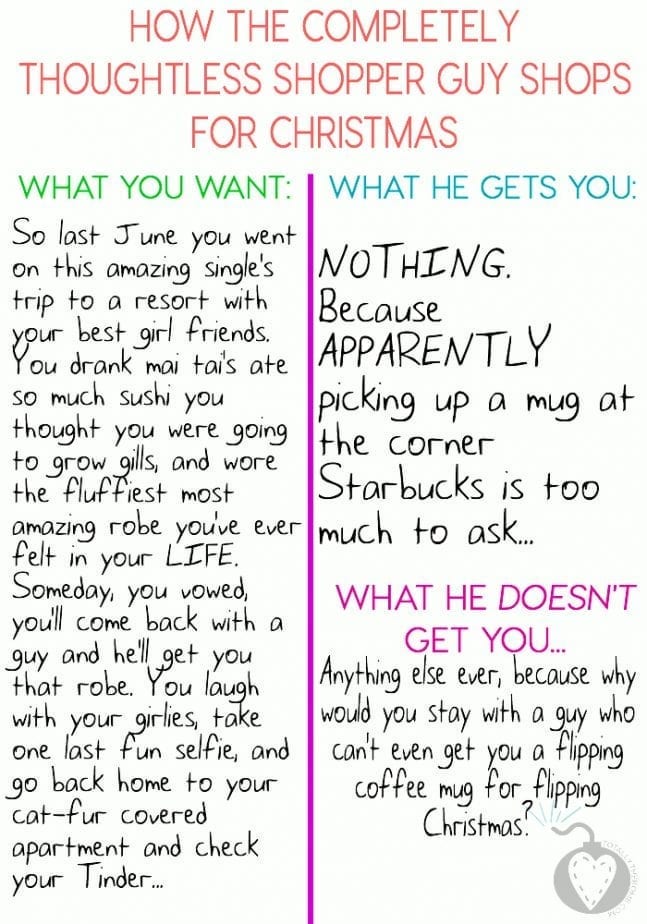 The “Where’s my engagement ring?”, about to be broken-up with shopper – This guy is already in doo-doo because you’ve been dating for a LONG time and you’ve been dropping hints that you’re ready for the next step. He hands you a gift. It’s a box. A small, square box. Your family is there. Your nana is 98 and she’s there. Your hands are shaking as he stands expectantly before you and you open the box to find…if it’s anything but a ring in that moment chances are you’ll be broken up before Valentine’s day. Sorry, pal. Eventually you’re gonna have to put a ring on it. 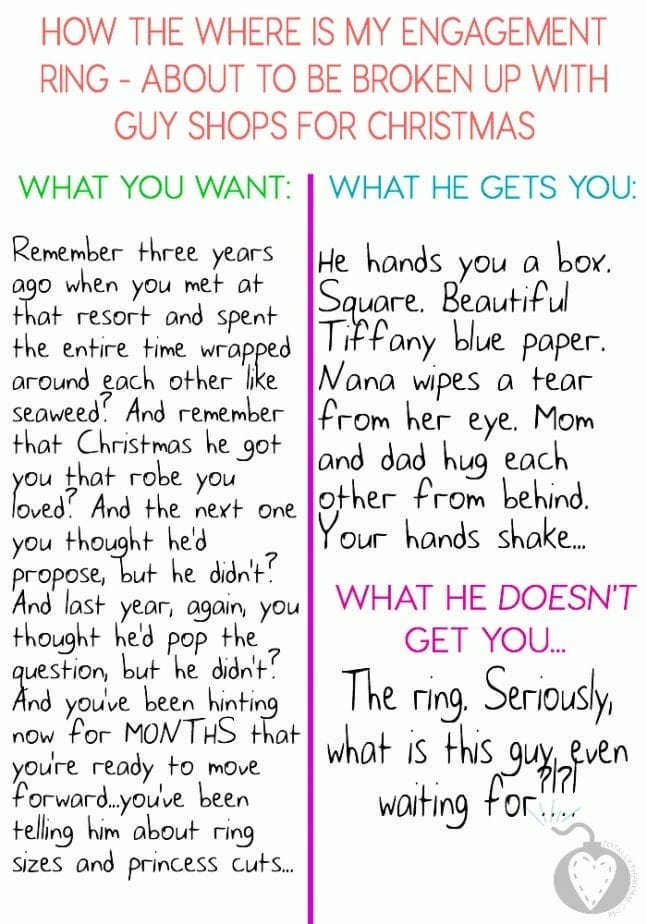 The practical gift shopper – this guy wants to do the right thing so he’s going to get you an automatic air pump for your car. Or a tool kit. Or maybe even a step-stool for the kitchen. This guy means well. He really is trying to take care of you. Just smile and know that you’ll also totally be able to count on this guy…even if he can’t gift worth a spit. 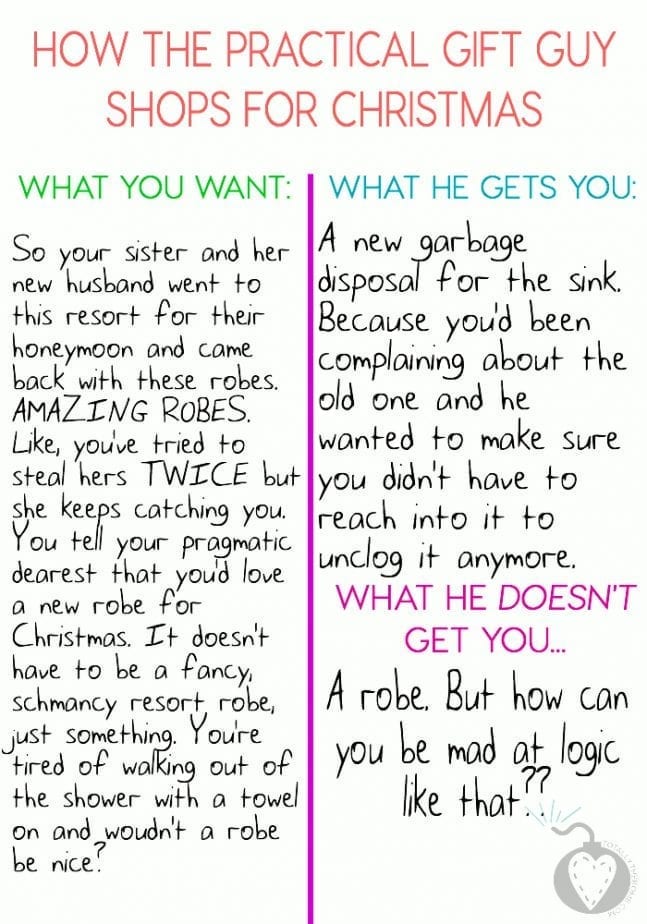 The no-thought gift shopper – man, this one kind of sucks. He’s gonna get you lotion, or a fru-fru basket from Walmart. He might even get you one of those crooked-heart necklace thingies they sell at Zales. Basically, whatever looks girly and he doesn’t have to think about, that’s what you’re getting. This is the same guy who rolls over and farts and goes to sleep right after sex, so just keep that in mind when it comes to opening that present. 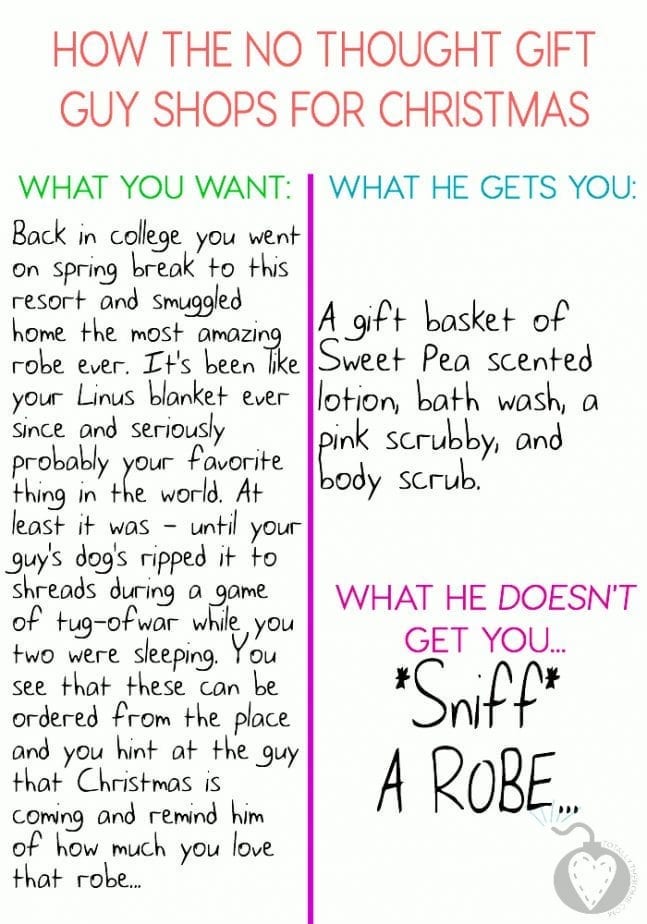 The gas station shopper – sometimes this guy will melt your heart like butter, and sometimes he’s gonna make you want to spit fire. This guy sucks at big gestures. He has no clue when it comes to what women expect or when he should go big, but he’s so super good at the little things. Or maybe he isn’t. I’m just saying, don’t hold this gift against him. If he makes you smile more times than not, just accept your little ceramic cowboy hat or eagle in flight and move on. 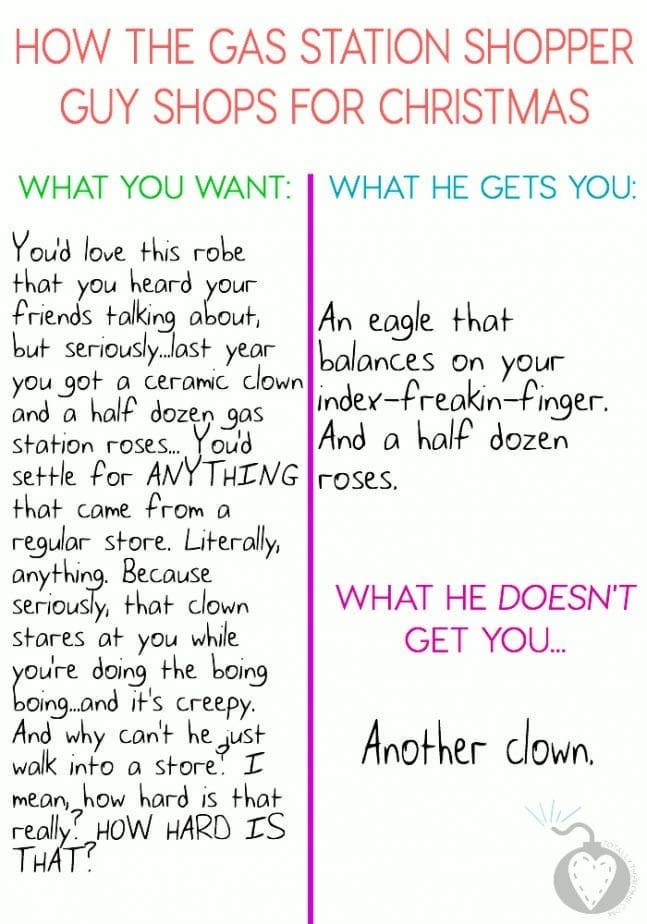 The gift card shopper – if you’re a girl who loves gift cards, this guy is fine for you. If you aren’t, this guy is going to drive you bananas. He’s literally saying, “I’d rather you buy your own present, and this is how much I think it should be worth.” If that statement makes you want to give him the dead-eye look…it’s probably best to move along. BUT…if you love the idea of getting exactly what you want and the cards are to places you love, then he’s good as gold. 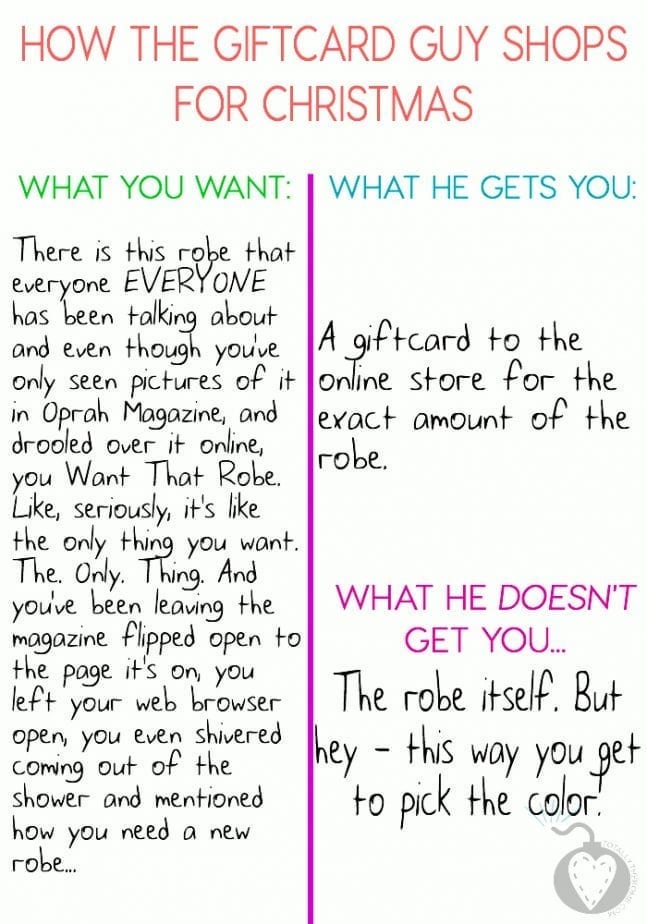 Now, I’m not saying any of these are necessarily bad guys (okay, so yeah at least two of them are really bad), and we all understand that “It’s the thought that counts,” but I kinda wish men didn’t depend so much on that saying. Sure, sure, there are some guys out there who always know the perfect gift to give and they’re basically saints walking amongst us. For most of us, though, we’re going to get some form of horrible gift and we’re going to have to smile and say ‘thanks’ remember that this is one day a year and at least we won’t have to deal with this mess again until Valentine’s Day.

My friend is the “Oh, isn’t that nice” shopper lol

My boyfriend is totally the giftcard shopper. He buys everyone giftcards. He also says then he doesn't have to wrap gifts. He thinks giftcards are so great that he even told me I should buy HIM a giftcard for christmas. My mom told me that was SUPER LAME.