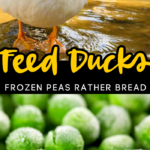 If you have a habit of feeding the ducks by the pond near your house, don’t go grabbing for the slice of bread you normally take with you!

While it’s typically normal to see groups of families toss bits of bread into a pond swarmed with ducks to eat, feeding them bread is actually the worst thing you can do.

Why You Shouldn’t Feed Ducks Bread

You should refrain from your old habits of tossing slices of white bread into the pond for ducks to devour because it instead, makes them sick.

Tossing in crumbled up bread prevents the ducks from learning how to find food on their own and sadly, can even go as far as deforming their wings so they can’t fly.

Slices of bread, especially white bread doesn’t offer much nutritional value to ducks and similar to humans, ducks like to fill up on tasty carb and forget to leave room for the more nutritious food, explained the Royal Society for the Protection of Birds.

A wing deformity known as “angel wing” or “airplane wing”, can cause the end of duck’s feathers to stick out sideways rather than flat against the body which in return, prevents ducks from flying in the future due to the junk food humans toss into the pond according to returntonow.

Not to mention, the uneaten bread crumbs can potentially attract predators and grow mold that can also make ducks ill, returntonow explains.

Therefore if you must feed a family of quaking ducks, you can in moderation, according to the Canal and River Trust; so here is a safer, healthier, and overall better alternative list of foods to feed the ducks with.

A List of Food You Can Feed to Ducks

While bread should be added to your grocery list for yourself and crossed off for the ducks in the nearby pond, frozen peas along with several other food items are healthier options to feed the old and young ducklings, according to the Canal and River Trust.

So while you can continue to feed the ducks that swim up to you during your morning walk, keep in mind that the list of foods they can eat are only to be given sparingly to keep them at their healthiest!