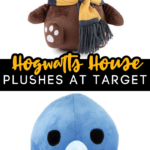 Target JUST released Hogwarts House plushes today and they are FLYING off the shelves! (Understandable!)

I saw a TikTok talking about them, and you better bet I RAN to the Target website to see if it was true. And the Gryffindor one had already sold out!

Not to worry though, because there are a TON still in stores and there’s also a plan for a restock. But within 5 minutes, Hufflepuff was hard to find too!

And for good reason, because that is the cutest badger I have ever seen! Slytherin and Ravenclaw are still currently available on the website, which are mine and my husband’s houses, so I just happened to luck out!

These just released today and there hasn’t been much word yet about it, so the chances of finding them in store are pretty good right now, so I would definitely run!

And if you want more than just your Hogwarts house, these released a Hedwig and a Dobby too!

RUN RUN RUN. Do not walk. Do not run errands first. If you want one, you better RACE to Target! (safely, of course!)