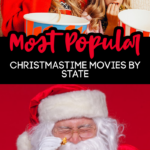 There’s no right or wrong answer when it comes to the best all time Christmas movie, there’s just too many to count.

Although during the holiday season, the classics must be watched.

Elf, the Home Alone series, The Polar Express and The Nightmare Before Christmas just to name a few.

With what truly feels like the most wonderful time of year, consumer site Comparitech set out to discover the most popular Christmas movies in every state and their answers, are unsurprisingly good.

While Home Alone comes in first place among the most commonly voted answer for nine states, the movie Elf with Will Ferrell only gained one state’s support.

Some believe Die Hard isn’t a Christmastime movie at all, however three different states voted the film the best holiday movie.

Surprisingly the Grinch who stole Christmas didn’t steal the hearts of many other people considering only three states voted for the green character.

So whether or not you agree with these answers, we can probably all agree that the holidays consist of long hours on the couch watching Christmas movies, drinking hot cocoa and downing an entire bucket of popcorn with extra butter.