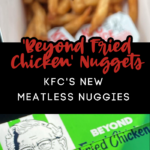 I don’t know if you’ve heard all the commotion surrounding the KFC plant-based “Beyond Fried Chicken,” but all the talk of these veggie nuggs intrigued me.

There have been rumors swirling for awhile about the release of these faux chicken nuggies, but they FINALLY dropped at KFC this week, so of course, I had to try them.

Now, full disclosure: I was raised a vegetarian, so I’ve eaten my fair share of fake chicken nuggs.

Back in the day, you couldn’t just go into a restaurant and order plant-based meats. You had to special order them, have them shipped to your house, and then you had to make your own “chicken” creations with what you had.

We’ve come a long way, which is good news for all you veggie heads out there.

Don’t misunderstand, I’m not a vegetarian anymore. I’ll chow down on a Chick-fil-A Spicy Chicken Sandwich like it’s my last meal.

But, that doesn’t stop me from delving into the world of vegetarian food — I actually prefer it.

What Are These KFC “Beyond Fried Chicken” Nuggets?

They are a new plant-based food option at KFC that is supposed to be similar in texture and flavor to the real thing.

It’s A Kentucky Fried Miracle! Tastes like chicken but made from plants.

Now, being that these are a plant-based chicken nuggie option, you would think they’d be good for vegetarians and/or vegans.

They are not. I’m guessing that’s why they are listed as “Plant-Based” and not “Vegetarian.”

Not prepared in a vegan/vegetarian manner.

What Do The KFC “Beyond Fried Chicken” Nuggets Look Like?

First, let me address the aroma. These little guys are trying REALLY hard to smell like chicken, but they just miss the mark. That’s not to say that they smell bad. It is just obvious that these are imposters posing as chicken nuggies.

BUT, instead of chicken, they are a little finger-food sized lump of — some kind of plant filling.

If you aren’t careful, the breading comes off rather easily, and you are left with a naked faux chicken. That’s not necessarily a bad thing, but it’s not the desired effect that you want in your plant-based nugget.

What Do The KFC “Beyond Fried Chicken” Nuggets Taste Like?

When you first bite into the “Beyond Fried Chicken” Nugget, you immediately notice how dense that little piece of faux meat is. It’s definitely tougher than the real thing.

The flavor? I want to say that these guys taste like chicken, I really do. But, if you are a meat-a-tarian looking to try something different, you definitely won’t associate the flavor with real chicken nuggs.

They don’t taste bad. As far as plant-based nuggies go, these are right up there in looks, texture, and taste.

If we were handing out stars, as far as meatless chicken nuggies go, I’d totally give these “Beyond Fried Chicken” Nuggets 4.5 out of 5 stars.

Would You Recommend The KFC “Beyond Fried Chicken” Nuggets?

Yes I would — with a caveat.

I wanted the full effect when I first tried these nuggs, so I didn’t dunk them in any of the sauces — I ate them naked.

I’m not going to say that was a mistake, but it wasn’t the most flavorful choice.

You are definitely going to want to go the dunking route when you try these little nuggies.

KFC has 4 sauces to choose from: Honey Mustard, Barbecue, Ranch, and their own KFC Sauce. Any one of these sauces are delicious for chicken nuggie dunking, but my favorite is definitely the Barbecue or the Honey Mustard.

After dunking the nuggs into one of the sauces, and if you don’t think too hard about it, you will swear you are eating a McDonald’s McNugget.

How Do You Order The KFC “Beyond Fried Chicken” Nuggets?

You can get JUST the nuggets — they run about $7 for 6 nuggs.

OR, you can get the “Beyond Fried Chicken” Nugget combo. It comes in 6 or 12 pieces, and comes with your choice of side and a drink.

If you don’t specify the side, they will give you their “Special Recipe Fries,” but you can change them out — which I did.

The combo is going to be priced just a little differently depending on what region you are in, but I got a 6-piece combo for less than $9.

Was it worth it? Yes. I would definitely get them again.

But, if you love the flavor of chicken nuggies, you won’t be fooled by these plant-based impostors.