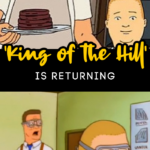 All you King of the Hill fans, hunker down and hold on, because I have some exciting news for you.

King of the Hill ended 12 years ago (HOW has it been that long?!?), devastating hordes of dedicated followers who showed up weekly for the shows dedicated to the Hill family.

6AM, and already the boy ain’t right!

It was one of the original members of the FOX Animation Domination block — which we all LOVED — surrounded by huge hitting shows like The Simpsons and Family Guy.

But now, after 12 long years, it looks like we are headed back to the fictional town of Arlen to check on our favorite animated family.

What The Hell, Bobby?

Yep, you heard me right. Greg Daniels and Mike Judge — the creators of King of the Hill — have decided to go out and form their own animation company, Bandera Entertainment, which has a bunch of shows in production as we speak.

We were very excited to go into different tones and different styles and try to expand the animation art form — We’re in a golden age for content, right? That’s animation, too. That was one of the things we were talking about in founding the company: ‘Let’s push animation into all these different genres.’

Greg Daniels to The Hollywood Reporter

The King of the Hill Revival

They aren’t spilling the tea on the revamped show just yet, but there is definitely a King of the Hill revival in the works, and we couldn’t be more excited.

Bobby, some things are like a tire fire, trying to put it out only makes it worse. You just gotta grab a beer and let it burn.

About Bandera Entertainment, the duo said that they are trying to work in a more supervisory role. They want to help others realize and achieve their dreams, much like they did.

There’s one show that I might be a co-creator of but the rest, it’s mentoring other people and getting people together and being a studio in that regard

So, there isn’t a whole lot of information as of yet regarding the King of the Hill revival, but we know they are working on it, and that’s enough for now.

I’m running some shows that I created and that’s very much a full, intense thing — Then I love that over here, I’m getting to do stuff and having different experiences, different ideas, working with different people, but it’s more reactive and it isn’t quite as like pulling out pieces of your yourself. It’s more like, ‘Oh, cool, I have stuff to say about this.’ And yet the end of the day, Dustin and [Bandera director of development] Jacey Naccarella are going to be staying up, getting it accomplished after we’ve kind of wound them up

What do you think? Are you excited that King of the Hill is coming back?