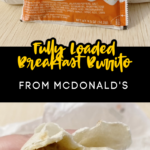 Did you know that you can get a Fully Loaded Breakfast Burrito from McDonald’s Secret Menu?

I bet you thought McDonald’s only had those wimpy sausage breakfast burritos, the ones that are sort of an afterthought on the menu.

In theory, yes, that’s what’s on the menu — those thin, sausage, cheese, and egg burritos. The ones that leave you wanting just a little bit more.

BUT, with just a few easy additions, you can have yourself a delicious Fully Loaded Breakfast Burrito that is tasty AND filling. Oh and it’s now part of the McDonald’s Secret Menu.

If you live in the south and you have had a sausage, cheese, and potato taquito from Whataburger, this burrito tastes pretty similar.

You don’t even have to get to the speaker at the drive thru and order something fancy and weird. It’s made of pretty straightforward ingredients that McDonald’s easily has on hand.

What Is The McDonald’s Secret Menu?

Just like with the Starbucks Secret Menu, the McDonald’s Secret Menu is a collection of drinks and food items that are made by McDonald’s employees and customers. They aren’t items advertised on the traditional menu.

How Do You Order A Fully Loaded Breakfast Burrito?

You will have to go in the restaurant or drive thru to order this burrito. The app isn’t set up to customize the burrito in the way that you need, unfortunately.

Now, you can’t just go in and ask for a Fully Loaded Breakfast Burrito. They will probably look at you like you are insane.

When it’s your turn to order, ask for specifically this:

Then get your food, say “Thank You,” and be on your merry way.

The magic happens once you park your car and pull that food out of the bag.

How Do You Make The Fully Loaded Breakfast Burrito?

First, take one of your sausage burritos out of the bag.

Carefully open it up. Their burritos tend to be a bit sticky and flimsy. Just do your best.

Take your hashbrown out of the bag, and break it in half.

Now, tear half of the hashbrown into little bits, and place them inside the burrito.

You can already tell this is looking better, right?

Now, CAREFULLY open up your side of gravy (it will be hot).

Pour about a tablespoon or two of the gravy (just eyeball it) into the sausage burrito.

Next you want to tear open the hot sauce, and pour it onto the gravy in the burrito. I tend to use a LOT of hot sauce, but you do you.

Now, you can carefully roll the burrito back up, making sure to tuck in the ends so the inside goodness doesn’t fall out.

All that’s left to do is to take a bite, and enjoy!!

If you like to try out Secret Menu items from restaurants, check out all these Secret Menu Drinks From Starbucks!