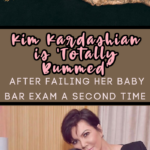 Kim Kardashian revealed on Thursday’s episode of Keeping Up With The Kardashians that she didn’t pass her second attempt of the baby bar exam.

Kim took her second test in November while sick with Covid. But despite her best efforts, she failed the test yet again. She claimed that she got almost the same exact score as the first time.

“It is what it is, I know I just have to not stress about it, there’s so many other f—— things, stressful things, going on, I just have to do better in the future,” she added.

Between her divorce with Kanye, turning 40, and having Covid, there were a lot of roadblocks for her to keep her eyes on the prize. But not to worry, Kim has already taken to the books and is starting to study for a round 3 of the test.

“If you do law school the way that I’m doing it, it is a four-year program instead of your typical three-year program,” she said in a confessional. “After year one, you have to take the baby bar. This one actually is harder, I hear, than the official bar.”

1 shares
You Can Get A Floating 'Pool Pong' Game That Takes Drinking Games To A Whole New Level
← Previous
Mountain Dew Just Released Baja Scented Room Sprays So Your Entire House Can Smell Like Your Favorite Soda
Next →
Click here to cancel reply.