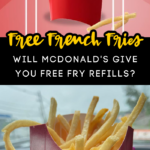 McDonald’s has historically given free refills — on drinks!

But, does this policy also apply to free refills on one of their favorite menu items — French Fries?

There is a TikTok hack video that is claiming that the restaurant will give you free refills on your fries.

But, is it really true?

There are many people (employees included) that say this TikTok video is completely FALSE.

Turns out, there is ONE McDonald’s location where free fry refills are a standard-practice policy.

One location in St. Joseph, Missouri, known as the “the McDonald’s of the Future,” lets their customers take advantage of free fry refills. They also make fancy customized burgers and deliver the food right to your table.

It just may be time for a road trip. *Smiley Emoji*

But, beyond the lucky people in St. Joseph, McDonald’s does not have an official policy on the refills — but the consensus seems to be “NO.”

Once this TikTok free french fry video was dropped onto the streaming platform, many were quick to jump in the comments section to give their take on the french fry debate.

One person says that if the manager isn’t there, the “kids working don’t give af.” Does that mean free refills on fries for everyone?

Still one person (who is officially known as @McDonalds_Historian1955) claims that in the fine print it says that LARGE french fries are eligible for a free refill at all locations.

Pretty much EVERYONE in the comments agrees that they have to try this hack. It never hurts to ask, right?