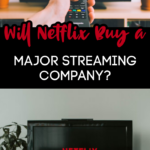 Despite Netflix’s popularity, it looks like the “popular’ streaming company is hitting a few speed bumps.

Maybe several speed bumps, considering for the first time in over a decade, Netflix has lost 200,000 subscribers in the first quarter and the company’s share value has dropped more than 25%.

So as a result, the platform is now considering action to expand its business model with the help of Roku.

And according to Business Insider, Netflix is rumored to be in negotiations with Roku and coming from a source familiar with the deal has also noted that these conversations have been ongoing in recent weeks.

Reports of Roku employee’s trading windows have also been paused for selling the Roku stock, which typically is inferred as upcoming information that could have a significant impact on its stock price.

Not to mention, this also helps to prevent insider trading.

Netflix may also be considering the thought of producing its own television, according to WatchinNZ.

Plus, it appears that Netflix desires Roku’s advertisements, considering it’s no surprise that the streaming service plans to introduce advertisements but on a lower-cost tier like Hulu and HBO Max.

Netflix CEO Reed Hastings recently pointed out during an earnings call interview that Netflix is now “very open” to shake up its business model in order to boost revenue and offer lower costs to subscribers.

Although while Hastings is not a fan of the complexity that comes with advertising, he greatly supports customer choice.

“It makes a lot of sense to allow consumers who would prefer a lower price and are advertising tolerant to obtain what they want,” he told investors via WatchinNZ.