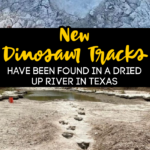 There is a State Park not too terribly far from me, just southwest of Dallas, called Dinosaur Valley State Park.

Sadly, I have never been able to go there yet, but it is on my bucket list of things I want to do.

The park is known for its Dinosaur tracks and it’s something I definitely want to see in person.

We’ve been in a pretty severe drought here in Texas, well up until the past few days that is, but during that time a river had dried up.

Due to the excessive drought conditions this past summer, the river dried up completely in most locations, allowing for more tracks to be uncovered here in the park.

The new tracks were found at Dinosaur Valley State Park and had been buried under layers of sediment from the river.

Under normal river conditions, these newer tracks are underwater and are commonly filled in with sediment, making them buried and not as visible. Being able to find these discoveries and experience new dinosaur tracks is always an exciting time at the park!

Stephanie Salinas Garcia also said that the tracks date back 113 million years and most belong to two different species, a theropod called Acrocanthosaurus and a sauropod called Sauroposeidon.

I’m sure with all of the rain that we just got that the tracks are probably covered again already, but knowing they are there is such a huge and exciting discovery for the park.

Thankfully, the sediment helps protect them from natural weathering and erosion and maybe they will be exposed during the next drought so that people can see them for themselves.