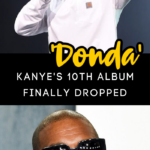 This has been (in my opinion), the most drawn-out album release in the history of recorded music!

It was originally slated to come out July 23rd, but that didn’t happen.

Now, I’m not sure if Ye is just a bit eccentric or if he is a GENIUS, but the drama surrounding this record release has hyped up major demand.

Pretty much as soon as it dropped onto streaming platforms, the album was #1 on the charts. But, I’m not just talking about Donda hitting #1 on the U.S. charts. Oh, nay-nay! It went to #1 in 130 countries!!

As you might have anticipated, Donda hasn’t dropped without drama — there is enough drama to last the rest of the year.

Just the listening parties, alone, earned the rapper an estimated $12 million. Just think, not only did people pay to get in the doors of these “parties,” but there were also massive amounts of Donda / Kanye merch sales.

But all those listening parties are not the end of the drama. Right before the album came out, Kanye (Ye) released some texts that were allegedly about the song, “Jail pt. 2.” There was apparently some problem over one of the verses being released. But, apparently it was all worked out, because that song is on the finished album.

THEN on Sunday, after the album dropped, Kanye claimed that the album was put out by his label without his approval. He also said that they blocked “Jail pt. 2” from being included. BUT, that song is on both Spotify and Apple Music. Just more drama.

But, even with (in spite of) all the Donda drama, the album was finally released to the public on August 29th.

Donda dropped to mixed reviews. There are plenty of people that don’t like Ye’s 10th attempt at a studio album.

But then, it still managed to be #1 on the charts. So, like it or hate it, Kanye still wins.

Like I said, he’s either a complete wack job, or the dude is a genius!