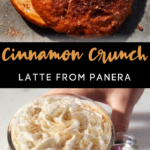 If you didn’t already know, Panera Bread has a cinnamon crunch bagel baked with cinnamon and vanilla flavored chips and coated in a sweet cinnamon crunch topping, sort of like Cinnamon Toast Crunch, but without the milk and bread.

Similar to the bagel that makes the entire store smell sweet, Panera gave it a twin, and one you can sip on at that.

The new latte inspired by its elder (the cinnamon crunch bagel), is absolutely made just for fall.

We’re assuming that since the new drink was inspired by an old menu item, we believe (and hope) that the new latte will also feature cinnamon and vanilla flavoring much like the soft bagel.

Although what we do know, are the toppings settling at the top of this newly found drink, including whipped cream and a sweet cinnamon crunch topping, as said so by Panera via Instagram.

The new latte will be brewed and served starting the first day of September; so there’s only 13 days left until we can sip on the new drink and not notice the top of our lip covered in whipped cream because of the sweet, sweet caffeine and cinnamon taste.