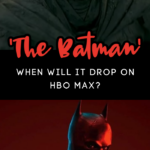 I just got back from seeing Spider-Man: No Way Home (highly recommend, btw), and one of the theatrical trailers during the preshow was for The Batman starring Robert Pattinson. OMG, it looks so good!!

The big release day for The Batman in theaters is March 4, 2022, but you might be wondering when you can catch it streaming.

There have been so many recent movies that have had sumultanious releases in the theaters and streaming, but unfortunately, we are going to have to wait just a bit for The Batman to hit a streaming platform.

First of all, the lucky streaming platform that will be the home for The Batman will be HBO Max. So, if you don’t get HBO Max, now might be the time to do so.

According to WarnerMedia CEO Jason Kilar, The Batman will drop on HBO Max after a 45-day exclusive window in theaters.

That is just over 6 weeks, for those keeping track.

This hybrid release strategy is something new since the whole global pandemic messed up theatrical releases. In 2022, WarnerMedia will move to releasing films in theaters before allowing them to be available for video on demand or streaming.

For awhile, WarnerMedia was releasing films to theaters and streaming platforms simultaneously, BUT in an effort to keep up with the viewing habits that have emerged during the pandemic, they have decided to move to this hybrid release strategy.

So, The Batman will be available to stream on HBO Max on day 46 after its release to theaters. That means subscribers can stream the film on April 19, 2022.

I am so excited!! For those still leary of heading out to the theaters, you can soon catch The Batman on HBO Max!

If you haven’t yet seen the trailer, you can catch it below.