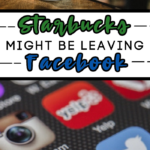 Starbucks is seriously thinking about getting totally off Facebook, and I don’t like that idea at all.

Of course, Facebook isn’t a fan of the idea either.

If Starbucks were to leave Facebook, they would be the BIGGEST company to ever leave the social media platform.

Facebook is scrambling to keep Starbucks — my coffee shop of choice, and perhaps the BIGGEST coffee shop in the world — actively on the streaming platform.

Apparently someone at BuzzFeed News got in contact with some Facebook employees who manage the relationship with Starbuck.

The company has become so frustrated by the hate and intolerance on the platform that it may remove its Facebook page.

It seems that Starbucks is sick and tired of the hate speech and insensitive remarks left on their posts.

Starbucks is in the process of evaluating their organic presence on FB, and whether they should continue to have a presence on the platform at all.

The Facebook employees told BuzzFeed News that whenever Starbucks leaves posts on Facebook about their values or mission statement — which include climate change, the LGBTQ community, and the BLM movement — they are inundated with “negative/insensitive, hate speech related comments on their posts.”

Moderating these posts has proven to be a problem and a struggle for the coffee giant.

Starbucks also hasn’t been able to disable comments on their page — which would make moderating the page a lot easier.

On top of the commenting and moderating issues, Starbucks has been inquiring about exactly how the Facebook algorithm works.

I think we’ve ALL wondered that!

They specifically want to basically know how the Facebook algorithm is working to help moderate the hate and insensitivity.

I don’t want Starbucks to leave Facebook, but I guess I understand where they are coming from.

We will just have to see how this plays out.

Speaking of Starbucks, you have to check out our Starbucks Secret Menu Drinks!