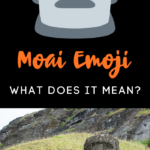 Emojis seem to get really popular, and then fade out just as quickly as they rose up in popularity.

It could be because the younger generation lets go of something as soon as the older people latch onto it. You know what I mean. It’s no longer cool if your parents are doing it now.

That is probably why the Stone Man Emoji — 🗿 — has now become the emoji of choice for the younger generation.

What Is The Stone Man Emoji?

First, let’s call it by its real name: Moai or Moyai. It is the Stone Man that you might recognize as one of those Easter Island statues.

You probably remember it from the film Night at the Museum. It has elongated ears, a big, elongated nose, and a heavy brow, and is usually carved out of gray stone. You know, the figure that is always calling Larry a “Dum Dum.”

Some also believe that the emoji is actually a reference to the statue of Moyai that is located at the Shibuya Station in Tokyo, Japan and is considered a local landmark.

Where Do The Moai Statues Come From?

The Moai statues are actually a mystery. You can find more than 900 statues covering the island of Rapa Nui (Easter Island), but nobody knows what they really mean.

The Rapa Nui were a people of Polynesian origin who arrived on the island around 400 A.D. But, archeological soil samples date the Moai statues as having been built between 1300 and 1450.

One theory is that they represented the Rapa Nui ancestors who watched over the village people, because most of the statues face toward the villages.

But, who knows if that’s really what they were for. And, nobody knows how in the world the ancient people were able to move and carve the stone statues.

What Does The Moai Emoji Mean?

The Moai statue — is “usually meant to imply strength or determination, and it’s also used frequently in Japanese pop-culture posts,” according to Dictionary.com.

But, what in the world do young people mean when they use the Moai emoji?

Well, it can certainly be used to show strength and determination. But, it is more of a broad emoji — meaning that people are using their own interpretations for the Moai emoji.

How Do You Use The Moai Emoji?

Most kids are using it to show a deadpan face — kind of sarcastically. Like, if you want to be “dry” about something, you would use the Moai emoji.

If you have a sarcastic sense of humor, you are most likely going to love this emoji.

How Do You Find The Moai Emoji?

In your phone emojis, it is probably buried past all the cars and automobiles, over by the Statue of Liberty and the Eiffel Tower.

If you can’t find it on your keyboard, you can alway type in the keyboard command “:moyai:” to bring up the little dude.

Just keep in mind — the quicker we all start using the Moai emoji, the quicker the younger generation will find it totally uncool. LOL!!