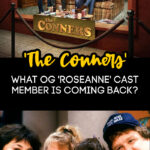 I can NOT believe that The Conners has been on for 5 seasons. That doesn’t seem possible. But, here we are.

Season 5 is going to see some changes, and I’m not just talking about — spoiler alert — the fact that both Jackie and Darlene are now married.

Just this week, we found out that Michael Fishman (DJ) is leaving the show — not by his own volition.

I mean, are they going to kill him off? Probably not. I’m betting he gets called back to service in the Army — but we’ll have to wait and see.

But, there’s another surprise in store for Season 5.

Executive producers Bruce Helford and Dave Caplan let it drop that one of the original cast members of Rosanne is making a comeback — but they wouldn’t tell us who.

I can’t reveal it, but there is someone coming from years’ past — It was a very memorable appearance when this person was there, and this person is coming back.

What does that even mean? There are literally DOZENS of people that they could be talking about.

I think people are going to be very surprised and go, ‘Oh s–t!’ — It’s someone who will very much be remembered from the previous show.

According to TVLine, he also said that you shouldn’t “overthink” the word “appearance.”

What in the world?!?

So, let’s play a guessing game. Who do you think is coming back?

It’s one that the true fans are really going to appreciate.

We’ve already seen a plethora of cameos by OG Roseanne cast members. Sarah Chalke (who was Becky #2), Estelle Parsons (Bev), Natalie West (Crystal), Johnny Galecki (David), and countless others have all joined in The Conners fun.

But, it’s somebody we haven’t yet seen on the reboot of our favorite show from the 90s.

I’m even thinking it could be Martin Mull (Leon) or Bonnie Bramlett (who played Roseanne’s coworker at Rodbell’s).

What do YOU think? Who’s coming back to make an appearance in Season 5?