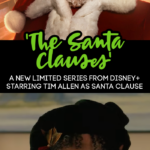 I absolutely love Tim Allen, and I truly believe he is one of the funniest men on the planet.

We’ve seen Tim Allen as Santa many times, but now we are getting an entire series on Disney+ called ‘The Santa Clauses’, and I can’t wait!

Yes, this is related to the film franchise ‘The Santa Clause’ with Tim Allen playing Scott Calvin/Santa, and there were 3 movies from 1994 to 2006.

Once again, Tim Allen will return to his iconic role in this new Disney+ Original limited series!

Disney revealed the first look footage during its D23 Expo this weekend and ahhh I am so excited to watch this with my family.

It’s been more than 15 years since we last heard from Santa, in ‘The Santa Clause 3: The Escape Clause’ movie.

In this new series, we see Scott Calvin creeping up on his 65th birthday and coming to the realization that he can’t be Santa forever, and it’s time to find someone that can replace him as Santa Clause.

In the trailer, we see the Calvin family, also known as the Clause family once again!

The new Disney+ series also introduces new characters such as Simon Choski, played by Kal Penn, who is a single father and game inventor!

Simon and his daughter Grace, take a trip to the North Pole, and going by his initials I think you can figure out where this is headed.

We also will meet a new elf named Noel, played by Devin Bright, that is Santa’s most trusted elf.

Then there is Betty, played by Matilda Lawler, who plays Santa’s Chief of Staff elf.

One other exciting bit of news is that Bernard the former head elf, played by David Kromholtz, is also returning for the first time since ‘The Santa Clause 2’ from 2002!

Jack Burditt, the creator of ‘Last Man Standing’ is serving as executive producer and showrunner and I look forward to seeing the magic that he and Tim Allen create in this new series.

We will be able to watch the ‘The Santa Clauses’ series beginning November 16th, 2022 on Disney+ beginning with a 2-episode premiere!

Check out the ‘The Santa Clauses’ trailer below and let me know what you think in the comments.