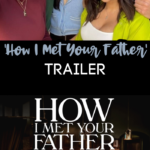 How I Meet Your Father has a new trailer, and you’re going to want to take a moment and watch it.

The sitcom sequel series on Hulu starring Hillary Duff has fans excited to see the actress play a big role on screen as Sophie, who tells her son the story of how she met his father, as explained by the title.

Setting the year in 2022, we see Sophie and her close friends discovering who they are, what they want out of life, and how to fall in love in a day of age that popularly uses dating apps.

While the city of New York commonly sets the scene regarding these kinds of sitcom set-ups, The Infinity stage was a huge help, technology similarly used in Disney+’s Star Wars.

Director Pamela Fryman talked about the wildly-powerful tool and the success it was being able to have the technology at her disposal while shooting the sitcom; she told Variety just how helpful The Infinity stage was during production.

“I was able to spend the day in Burbank shooting a scene on the Brooklyn Bridge,” Fryman explained to Variety. “The logistics and price tag of shooting on location (even when there’s not a pandemic) would have made this scene impossible — but thanks to this new technology the scene is in the can.”

How I Met Your Father premieres on Hulu in the new year on January 18 and you can watch the trailer, here.