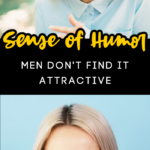 If you ask women what features they find attractive in a man, almost all of them will say “Sense of Humor.”

But, if you ask the same question to men, apparently sense of humor does not rate on their attractiveness scale.

This has actually been tested.

In one study, participants were shown two sets of photos. Each set had people that were equally attractive, but under one set of photos there was a witty caption. Under the other set of photos was a generic caption.

Women rated the men with the funny captions as more desirable.

BUT, the captions had no effect on the way men felt about how hot the women were. They just chose literally whichever picture they found attractive.

This doesn’t bode well for online dating services where women have tried to be funny or playful in their captions.

They will go just solely off looks alone, and could really care less what the caption has to say.

Now, I realize that these statements set a certain stereotype of men. I guess it’s fair to say that not ALL men fall into the “don’t find a sense of humor sexy” category.

But, you can’t argue with science, man — and according to the study, the science says guys don’t care about humor when it comes to attractiveness of women.

You can take it even further. Men don’t find women funny — even comedians, whose job it is to be funny.

WHAT?!? You may be asking yourself how this is even possible. The ladies have jokes!

There was a personal, very nonscientific, survey done which basically asked men if they found women funny.

He privately polled roughly twenty of his male friends with a simple question — “Name a funny female comedian.”
The responses from his male cohorts told me all I needed to know. They all agreed with him. Women are not funny.

Apparently, it doesn’t mean the women aren’t hot. They can have a sense of humor and still be attractive, but it doesn’t factor into the person’s hotness.

I’m gonna need y’all to discuss this, because I can’t wrap my head around it. What do YOU think?