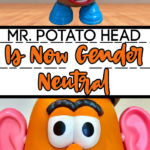 Mr. Potato Head is no longer a mister.

The goofy looking toy with the fake mustache and big ears; well, according to Hasbro, the classic plastic toy is now gender neutral.

The company that makes Mr. Potato Head (Hasbro), is giving the spud a gender neutral name.

From here on out, Mr. Potato Head will now be referred to as “Potato Head”.

Including with the change in name, the new title will also appear on packaged boxes coming this year and this isn’t the first time kids toys made changes to their classic brands.

To name a few, Barbie has shed its blonde image and now comes in multiple skin tones, different color hairstyles and body shapes.

Hasbro said Mr. Potato Head, now Potato Head, needed a modern makeover so kids can relate to their toys, according to Hasbro via AP News.

STUPID!! GIVE ME A BREAK ! Why destroy all great American icons and traditions in this country.

I feel like this is being taken too far. Huge supporter of everyone’s life choices. Like, who got offended by Mr. Potato? Seriously.