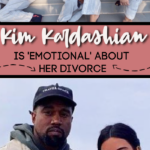 We all know divorce is hard. It is sometimes sad, sometimes frustrating, but it is ALL THE TIME hard.

It’s no different for celebrities — but they have to do it very publicly.

It has already been reported that Kim Kardashian and Kanye West are getting divorced after nearly 7 years of marriage, and the end of this chapter has been hard and emotional for Kim.

Although Kim and Kanye have been separated for months, it was still emotional for Kim to actually file for divorce.

I mean, they have been through a LOT! Pregnancy, surrogacy, four kids, music albums, paparazzi, Kanye political rants, and more.

So, how has Kim been dealing with the split from her soon-to-be-ex husband?

She spent the weekend taking care of herself and her kids. She is spending time with her mom, sisters and hasn’t been working. Everyone is supportive. Kim feels very lucky to be surrounded by her big family

A source tells People that Kim and Kanye aren’t fighting at all.

There is no drama between Kim and Kanye. Kim is mostly just disappointed that they couldn’t figure out how to stay married.

It always takes 100% from BOTH individuals to make a marriage work, and it looks like Kanye just wasn’t that interested in giving his all to the marriage.

But it takes two people to create a happy marriage. Kim has felt Kanye is not willing to do the hard work and compromise.

They just aren’t at the same place when it comes to what they want out of the marriage.

It is okay to have these different feelings, but it sometimes means the end, which is always sad.

As for how Kanye is dealing with this whole mess, he saw it coming, but that doesn’t make it any easier.

Kanye is seeing counselors and advisors to help him through this spot. It’s rough for him, and he isn’t happy, but he’s resigned to reality.

Luckily, when it comes to custody, splitting everything up, and how they will continue parenting, Kim and Kanye appear to be on the same page.

That’s a good thing. It could get real ugly, real fast, but it looks like they are past the difficult part of the decision making.

Good luck to both Kim and Kanye. I don’t envy you this chapter in life, but I do wish you the absolute best.