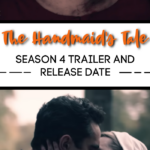 Y’all!!! I have been having some major Handmaid’s Tale withdrawals!

It seems like FOREVER since we left SPOILER ALERT — Offred — er — Ofjoseph — er — June in the forest, being carried away by the other handmaids.

Thanks to that pesky little virus that caused a worldwide pandemic of everything-on-earth-shutting-down proportions, we had to make it ALL OF 2020 without getting our Handmaid’s Tale fix.

BUT, that is about to change, my friends!!!

This is not a drill!!

According to TVFanatic, June and the rest of the handmaids are set to return on Wednesday, April 28, and I CAN.NOT.WAIT!!

Not only was it announced that The Handmaid’s Tale is actually returning, we were blessed with a bigi ol’ trailer.

Seriously. It’s over a minutes and thirty seconds long, and it looks so freaking good!! SQUEE!!!

In the trailer, it looks like maybe June is on the run — as she isn’t wearing those confining red outfits that we have grown to loath over the seasons.

The thing is, though, nothing is ever as it seems when it comes to Gilead and those in it!!

We may get focused on one thing in the trailer, and then they pull the rug completely out from beneath us, and leave us gasping for air!!

The GREAT news, at least for me — because I love him — it looks like we get to see more of what is going down with Nick.

As the trailer goes on, we are listening to a Radio Free America broadcast on a transister type car radio.

It leads us to believe that all hell has broken loose in Gilead. The system that they so carefully put into place seems to be crumbling around them.

It looks like war and possible martial law has racked the country.

It even looks like we get to see Hannah again!!!

There are lots of guns, tons of running, a lot of what looks like war, and I can’t wait to go along for the ride!!

We don’t hide. We fight.

Watch the trailer for season 4 of The Handmaid’s Tale HERE.

Pssst. A little birdie told me that The Handmaid’s Tale is getting a 5th season, and I couldn’t be more freaking happy!! Her story isn’t ending anytime soon.

We’re very grateful to Hulu and MGM that the show will be returning for a fifth season, and especially to our loyal fans for their support